Journey to the Pros: Holmes seeks opportunity in NBA G-League 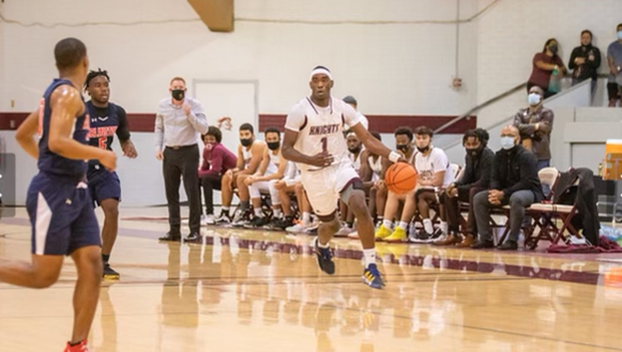 Izzy Holmes dribbles up the court while playing for Southwestern Adventist in Texas. He led the team in points per game before the season was canceled due to COVID in 2020. (Courtesy Photo)

SAN ANTONIO — Four years ago, Izzy Holmes Jr. was a standout guard and Natchez High alum focused on playing at the next level.

Holmes has faced a long and winding journey since then and is now in the midst of workouts that he hopes will help him win him a contract with the NBA-G League and open a door for him to pursue a childhood dream to play in the NBA.

Homes graduated from Natchez High School in 2018 and made his first stop at Riverland Community College in Albert Lea, Minnesota. He won a conference championship his freshman year before transferring to Southwestern Adventist University in Keene, Texas.

At Southwestern, he averaged 25.7 points per game before COVID-19 cut the season short. He moved on to Texas A&M University–Texarkana where he played basketball until this summer.

“COVID messed everything up. For college athletes it was like a recycled process,” he said. “Everything stopped. You try to put yourself in a position for what was best for you. When school was starting to get back, I was playing great for Southwestern and then COVID shut down the school. COVID canceled last season too. I had some decision making. You don’t know what the future holds, but for me chasing a dream was a gamble I was willing to make.”

Holmes started searching for opportunities with teams to try and get his foot in the door. His different stops in college had led to a network of relationships. One of those relationships was with a professional player who taught Holmes what was waiting for him and how to be a professional.

A connection with a friend in the NBA got Holmes a chance to workout for the San Antonio Spurs G-League team.

“God will always give you an opportunity if you have faith,” Holmes said.

Currently, he is working on his body and mind to prepare for the workouts. Playing in the NBA has been a dream of his since he was a kid. He said his mom told him it was something he could do and he thought he had the talent.

Head Coach David Haywood said he remembers Holmes as being an athletic player. He loved the game of basketball so it is not a surprise he is pursuing the NBA.

“He was one of those kids you had to keep out of the gym because he would be there from first to seventh periods,” Haywood said. “He loves basketball and he tries to play as much as he can… He is still trying to chase the dream and he is young and can do that.”

His senior year Holmes’ mom was diagnosed with breast cancer. She died while he was at school in Minnesota. “I set a goal for myself and I knew I wanted to make it to the NBA. It was a hard period for me because she always told me I had to be focused on my education,” Holmes said. “No matter what the outcome was going to be she told me she would be all right. I had to be disciplined and I knew what she would want.”

Holmes said the secret to reaching the next level is to put in work outside of team practices. It may take some sacrifices. Looking back, he said he remembers missing time with friends during high school because he had to work on his game.

These days, Holmes’ alarm clock rings at 5:30 a.m. and he heads to the gym from 6 a.m. to 8 a.m. From 8 to 9 a.m. he has recovery and at 9:30 he is getting cardio in until 11 a.m. Then he takes lunch before returning to the gym for weights from 2 to 3 p.m. After the gym, he goes and practices or plays basketball for a couple hours before doing cardio again and recovery. His next step is sleep, and he repeats the routine at least six days a week.

“My dream motivates me. Every day, even the days where I don’t even feel like it. I always think to myself ‘Is this something I really want?’” Holmes said. “I just want to do something I have wanted to do since high school. The main goal in our lives is to make money to support your family. Right now my time is invested in basketball.”

Holmes said he learned some important lessons while playing for Haywood. Some of those carried over into life outside of basketball as he learned to be a leader and not to be selfish. Natchez is a community where he hopes to be a face in the area to inspire kids.

“I have a lot of younger ‘brothers’ in the sports community in Natchez. They are trying to achieve their goals and I want them to know what it takes,” he said.

Perhaps the best support Homes received was from his second mom, Shirley-Mitchell Bailey. “I thought I had lost that motherly love and she stepped up for me. Your mom pushes you to do everything. I thought I had lost all of that,” he said. “I know I can talk to her every step of the way about what I’m doing. She asks me if this is what I want and she wants me to take it full on. I’m grateful for the love she has given me. I hope this dream comes true so I can help her to retire.”