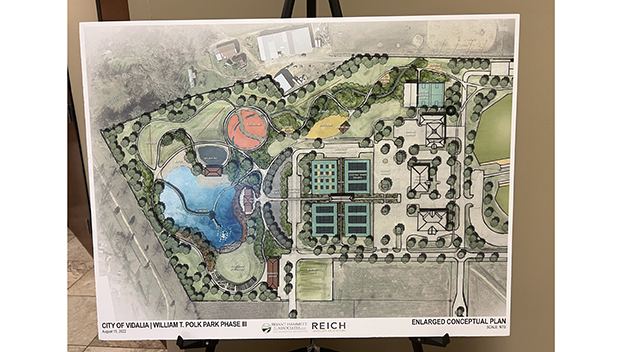 A rendering of planned improvements to Polk Park, adjacent to the Vidalia municipal complex. Officials plan to use revenue generated by the Sidney Murray Jr. hydroelectric plant for the improvements. (Sabrina Robertson | The Natchez Democrat)

VIDALIA, La. — A final public hearing on the Town of Vidalia’s list of planned projects for its expected hydroelectric revenue was Monday.

Officials are planning to spend millions made from the sale of power at the Sidney A Murray Jr. Hydroelectric Station to make several improvements throughout the town.

Vidalia Mayor Buz Craft said he didn’t have an exact amount of how much revenue the town would be receiving from the hydroelectric plant at this point. However, he did say the town is looking at around $22 million in revenue this year, some of which the town plans to use to pay off debt and rebate citizens who pay for utilities.

The hydroelectric station is owned by a number of investors, however, the town is a co-licensee of the station and receives royalties from the power sold equivalent to six percent of the station’s gross revenue. In an agreement the town struck with Catalyst, one of the station’s main investors, over 30 years ago, Vidalia will have the option to fully own the $550 million station in 2030.

The wish list for the revenue generated by the power plant includes several projects requested by both Vidalia aldermen and citizens.

Alderman Brent Smith requested pavement on the area used for the annual Relay For Life event at the town’s recreation complex as well as concrete in the ditch between Eleanor and Viking streets. Alderman Jon Betts asked for the town to first pay off any municipal dept.

Alderman Robert Gardner requested the town to pay for the insurance of the annual Miss Lou Memorial Day Parade, which is perhaps the area’s longest-running parade that originated in Vidalia. Alderman Tommy Probst asked for trees to be trimmed along the town’s utility lines to prevent future power outages.

Several have shown support of the completion of Polk Park next to the municipal complex, which is slated to receive new playground areas, a splash pad, a disc golf course, a skate park, a dog park, new pavilions, a pickleball court, exercise equipment and bicycle and walking trails.

The town also plans to give the Concordia Parish School District up to $500,000 to turf the Vidalia High School football stadium and to replace safety netting around the softball and baseball fields at the recreation complex. Craft said he has also been in talks with the school district about a new track field at Vidalia High School.

Renovations are planned for the historic Concordia Council on Aging and Masonic Lodge buildings. The town also plans to fund summer youth programs and activities for the elderly.

The Vidalia Beautification Committee requested a large flag and flag pole for the municipal complex area and botanical pictures to decorate the town’s utility boxes.

More requests added to the list Monday include improvements to the soccer field at the recreation complex and adding decorative street signs to replace every street sign throughout the town.

“That would add a lot to our neighborhoods and dress up every district,” Craft said of the signs.

Graham Roberts of the Concordia Recreation Board said while soccer is a popular sport in the area, the existing soccer fields are a “hay field” and that bathrooms are needed near the fields where none exist.

Craft said he would like for town officials to take this list and “put dollars and cents on it” before coming back into another public meeting to approve the final list.