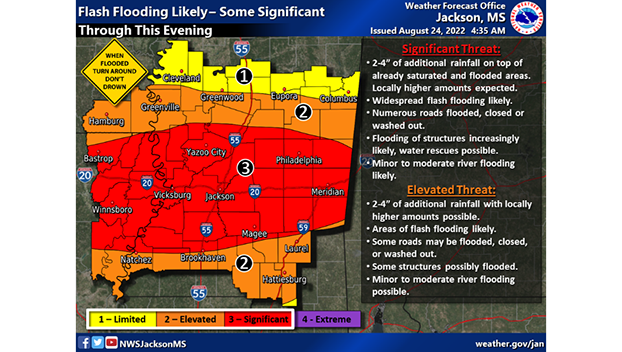 JACKSON — National Weather Service’s office in Jackson announced there is a likely chance of flooding in Southwest Mississippi as heavy rainfall continues in the state.

Natchez is on the border of elevated and significant threat from the flood waters. Precipitation is expected to be two to four inches with local amounts possibly being higher.

This increased rainfall is adding to saturated areas with standing water. Flash flooding is likely and numerous roads could be flooded or washed out. NWS reminds drivers to turn around and don’t drown.

There could be a threat of minor to moderate flooding of rivers such as the Homochitto River.

3.22 inches of rain have fallen over the past 24 hours. This adds to the monthly total of 9.55 inches which is seven inches greater than the monthly average. Natchez’s year to date total is 49.98 inches of rain and the yearly average to date is 34.62.