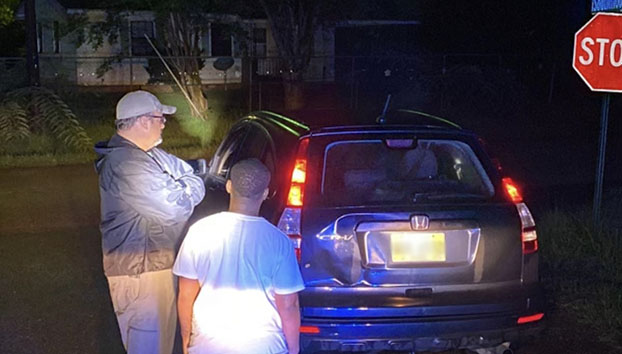 A resident of Woodhaven Drive called 911 early Monday morning after an incident with a man who he saw walking up his driveway.

Arrested are Tia Grooms, 28, and Xavier Jenkins, 22. Grooms is alleged to have been the driver of a Honda CRV seen by the Woodhaven resident Monday morning at the end of his driveway. Jenkins is alleged to have fired shots at the resident, one of which entered the laundry room of his home.

Natchez Police Chief Joseph Daughtry said the resident was awakened by his wife at about 2:35 a.m. Monday, who told him a car was parked in the road in front of their home near their driveway. The car was not running but had its lights on.

The resident told police he went to his front porch in an attempt to see if the vehicle was broken down and its driver in need of assistance.

He told police that when he got to his front steps, he saw a man walking up the driveway. He asked if he could help him with something, to which the man replied with curse words.

The man in the driveway then yelled to the person in the car, “Let’s get out of here, man.”

The resident was not injured, but one bullet entered the home.

Daughtry said his officers and detectives responded to the scene and have recovered evidence from the home, which is being sent to the Mississippi crime lab.

At least one other resident in the neighborhood reported to police his vehicle was broken into early this morning and items taken. The vehicle was unlocked.

Adams County Sheriff Travis Patten said in a press release issued Monday morning his office, as well as other agencies around the Miss-Lou area, were notified officially by the Natchez Police Department on Tuesday evening at 7:49 p.m. to be on the lookout for a blue Honda CRV SUV, which was suspected of being involved in burglaries.

“Off-duty members of the Special Operations Group and Patrol Division were activated to start an intensive search for the suspects and the vehicle in question,” Patten said.

“By 9:19 p.m., members of this group spotted and conducted a traffic stop on the vehicle at the corner of Broadmoor Drive and Southmoor Drive. Based on video provided to law enforcement by residents in the Woodhaven Subdivision and the Natchez Police Department, we were able to enhance the video in order to identify this vehicle based on information obtained from the video,” Patten said.

The vehicle was confiscated and the driver, Groom, was taken into custody and transported to the ACSO’s Special Operations Group facility, according to the press release.

“I then asked him if he and members of his team would meet our team at the above mentioned location to take possession of the suspect and the vehicle,” Patten said in the press release.

The suspect and the vehicle were turned over to Natchez Police.

“The members of ACSO’s team that had been activated were ordered to see this through to the end and continue to assist NPD with this phase of their investigation until the second suspect was in custody.

At 12:47 a.m. Wednesday, the second suspect, Jenkins, was in custody, Patten said.

“This is one of those cases where timely networking, transparency and information sharing between law enforcement and the community really paid off. The information provided by the citizens of the Woodhaven Subdivision community was invaluable when it came to assisting NPD with the closure of this case.

“Within one and half hours of officially being notified of the search for these suspects, the first suspect and vehicle used in this crime, were in custody,” Patten said. “I want to thank NPD also for sharing this information on this search with area law enforcement to help aid them in the search because the lines of communication have to stay open in law enforcement in order to maintain a safer community for all of us.

“Last, but certainly not least, I want to thank all the members of ACSO that were activated in regards to the search. I know that your hearts bleeds love for this community and you showed that with the passion that you put into helping bring this to a close,” Patten said. “This community is certainly better off for having you here, and you being committed to making it safer.”

Daughtry, who was out with his officers working the case overnight, was not immediately available for comments Wednesday morning on the apprehension of the suspects.