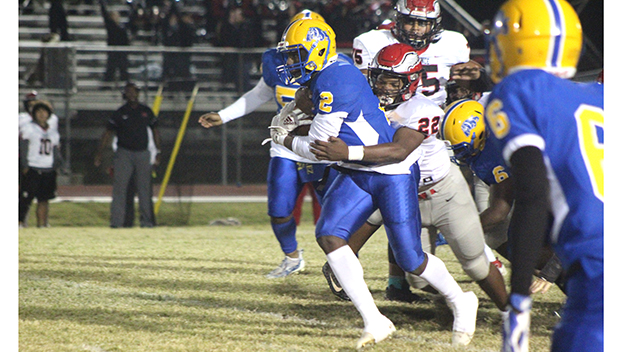 Natchez running back Traylon Minor was voted a Best of Preps winner in early November. (Hunter Cloud |The Natchez Democrat)

NATCHEZ — The Natchez High School Bulldogs play host to one of their nearby rivals in the Wilkinson County High School Wildcats Friday night at Tom F. Williams Memorial Stadium in the season opener for both teams. Kickoff is scheduled for 7:30 p.m.

And for perhaps the first time in this rivalry, both squads will feature first-year head coaches. Steve Davis takes over for Randy Craft at Natchez High while Christopher Brown is the new man in charge at Wilkinson County as he takes over for Jeffery Gibson.

Natchez High played at the Vicksburg High School Jamboree last Friday night and lost to the host Gators 22-6. Davis said his team had opportunities to put even more points on the board, but his team was unable to finish drives with touchdowns.

“We did okay. We took some things from that game — finishing plays, being aggressive, aligning right. We took those things to fix our errors going into Friday night. I was most pleased with we showed what type of team we could actually be,” Davis said. “Making tackles, running the right routes. What I was most pleased with was we kept fighting until the end. That was the biggest thing.”

The Bulldogs were without starting quarterback Kaden Walton, who Davis said tested positive for COVID-19 earlier in the week. Traylon Minor stepped in and Davis said he was thrilled with what he saw from Minor.

“We had to change up. Traylon stepped up beautifully. He performed well last Friday,” Davis said. As for who will take snaps under center this Friday night, he said, “Kaden’s our guy. He’s been practicing this week. He actually got to practice a little bit last Friday night.”

Wilkinson County played in a scrimmage game last Friday night against Raymond High School. Brown said the Wildcats did pretty well and showed a lot of promise and improvement from what they looked like last spring.

“We showed lots of growth and improvement from the spring. We were slow and sluggish in the spring,” Brown said.

As for what he was most pleased with coming out of the Wildcats’ scrimmage game against Raymond, Brown said, “Our offensive line. They have grown up the most since the spring jamboree game.”

Brown added that are several areas on his team that still need to get better heading into their showdown with the Bulldogs.

Both Natchez High and Wilkinson County have had their practices affected by the heavy rain which has plagued the region this week.

“We haven’t been really able to go outside,” Davis said. “We spent a lot of time inside fixing blocking schemes on the interior. Defensive line, linebackers lining up right, knowing their assignments. Understanding who to block.”

“We haven’t been able to get outside this week,” Brown said. “We’re going inside and doing what we can to be mentally ready. They have mental toughness. I think we’ll ready to go Friday night.”

Davis said he doesn’t know what to expect from the Wildcats on either side of the ball when the two teams take the field Friday night.

“I haven’t heard anything on Wilkinson County. They have a new coaching staff. So we don’t what they’ll do offensively or defensively,” he said. “We’ll just focus on us and playing our brand of football. If we do that, we’ll be okay Friday night.”

As for who on the Bulldogs will need to have a big game for them to come out victorious, Davis said, “My linemen up front. Landon Sewell, Kenny Fitzgerald (Jr.), Cameron Dunbar, Jamarii White, and Collins Jasper. Those guys up front, need to have a big game up front to protect the quarterback and so we can run the ball. I’m expecting big things out of them Friday night.”

As for who on the Wildcats will need to step up and have a big game if they are to upset the Bulldogs in their home stadium, Brown said, “Everybody. We’re going to need everybody in uniform step up his role.”

This will also be the first of five straight home games for Natchez High to start the 2022 season.