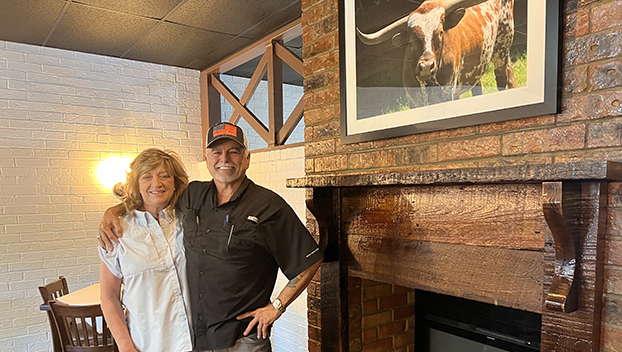 From left, Brenda Floyd and Leslie Floyd stand next to the fireplace inside Brandin' Iron Steakhouse. (Sabrina Robertson | The Natchez Democrat)

VIDALIA, La. — Few restaurants can make their patrons feel they should both dress up in their Sunday best or dress down to boots and jeans at the same time.

Leslie and Brenda Floyd are no strangers to the restaurant business but are branching out their business ventures in a stretch of Carter Street in Vidalia, Louisiana.

The Floyds owned and operated a few Natchez restaurants, including own BB’s Kitchen inside the Go-Mart on U.S. 61 South and formerly BB’s Grill, which was located next door.

In 2020, they closed BB’s Grill and opened up BB’s Fish Fry and Barbeque in Vidalia, Louisiana, and later bought Craws, Claws and Tails, which is located down the highway from there next to the Mississippi River bridge. They renamed the restaurant “Crawdaddy’s,” updated the menu, and plan to expand it to add a drive-through.

Their latest restaurant venture, Brandin’ Iron Steakhouse, is conveniently located next to BB’s Fish Fry at 1102 Carter Street, where Leslie said he can easily manage both places.

Brandin’ Iron officially opened on May 17.

Locating a new restaurant in Vidalia was an easy decision for the Floyds.

“This area has been good to us,” Leslie said. “This building was available, so my thoughts were, why not put one right next door because it’s easy to handle both? Also in Vidalia, to my knowledge, there’s no other so-called steakhouse. There are other cafés and eateries but nothing that is known as a steakhouse.”

The building, which was formerly Sonny’s Pizza, seemed like a good fit.

Leslie said they gutted the building and renovated it floor to ceiling. All of the furniture, lighting, appliances and decorations are new.

“We did 100 percent of it. We didn’t cut any corners,” he said. “Nothing had been used when we opened these doors. Not a pot, pan, fork or spoon.”

Hungry customers are greeted by a fireplace at the center of the restaurant. Brick partitions are separated from the ceiling with a wooden structure reminiscent of a barnyard fence.

Large brown eyes watch from a photograph of a longhorn hanging above the fireplace mantel as people chow down on premium cuts of steak.

Steak cuts—including filet, ribeye, Cowboy ribeye, New York Strip, brisket or Wagyu—are anywhere from 6 to 20 ounces and can be accompanied with a baked potato or sweet potato, truffle fries, mac and cheese or your vegetable of choice.

Customers can get started with savory appetizers such as bloomin’ onion, fried green tomatoes, brussels sprouts, shrimp cocktail, pepper jack cheese bites and boudin eggroll; refresh with a glass of wine, beer, liquor or bourbon; and finish up with a mouthwatering bread pudding, crème Brulee cheesecake or vanilla ice cream.

“All of our steaks are high quality,” Brenda said. “We also do to-go orders and Door Dash. Everybody is using Door Dash now. … And we have a great bone-in porkchop.”

Brandin’ Iron also has a Blue Plate lunch special on Tuesday through Friday from 11 a.m. until 2 p.m. and Sunday from 11 a.m. to 4 p.m. with a different homecooked meal each time, such as ham, chicken or dressing, he said.

They have also hired at least a dozen employees to run the new restaurant and are always taking applications, Leslie said.

“We have at least 50 people working between our three restaurants,” he said.