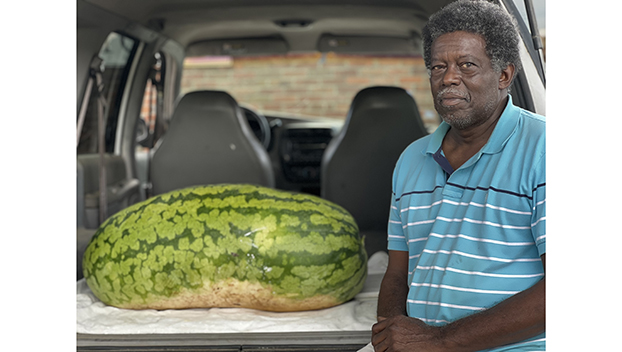 NATCHEZ — Alvin Hawkins grinned as he opened up the back of his SUV to show off his first 109-pound watermelon.

The Natchez resident said he dreamed about growing the novelty-size watermelon called a Carolina Cross, which can grow larger than 200 pounds.

This year, he decided to try.

“They can get up to 250 pounds if nurtured properly,” he said. “Because of all of this weather, I had to cut mine off short. The rain would make it rot. It’s not a record size, but it’s the biggest watermelon I’ve ever seen and a whole lot of other people have never seen one that big.”

Hawkins said he started the melon from seed and grew it at 759 Maple St., where the old Pepsi bottling company used to be.

“I have the ideal spot for them to grow in,” Hawkins said. “There’s a spot I’d been composting for maybe 20 years. I’ve been intending to grow this melon for a long time.”

He had to soak the seed for several days, then place it in soil to sprout. Then he prepared a hole with leaves and cottonseed meal fertilizer to transplant the melon into once it reached a good size.

He planted the seed around the first of June and nurtured it for nearly three months, he said.

“I’ve grown a whole bunch of stuff, but this was a novelty item that I really wanted to try,” he said.

Hawkins said the thick rind of the melon supposedly keeps the dark red inside nice and sweet, even at larger sizes. He plans to invite a large group of neighbors and friends who watched the melon grow to eat it with him.

“I’ll have to let you know how it turns out when we try it,” he said.