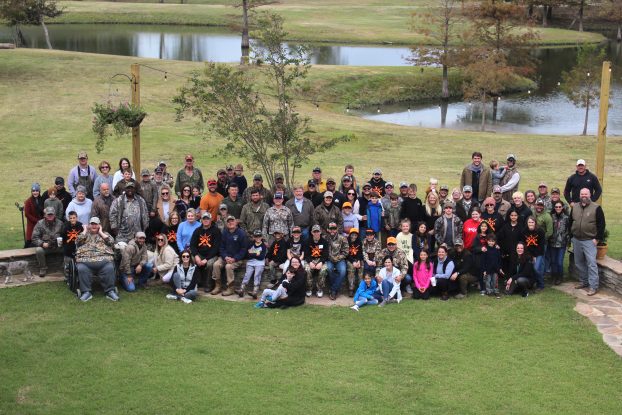 Volunteers, families and kids gather for a picture at Rifle Point after a successful morning for their dream hunts. (Hunter Cloud | The Natchez Democrat)

JONESVILLE — Last year the Dream Hunt Foundation Miss-Lou Chapter took 12 kids on a hunt at Rifle Point Hunting Club. All 12 enjoyed the hunt of a lifetime and harvested a deer, providing meat for their families.

In order to raise funds for another hunt, the foundation is hosting its second annual sporting clay shoot on August 27.

Dream Hunt’s goal is to have 30 teams of four shooters compete in the event with registration starting at 8 a.m. and the competition at 9 a.m. There will be door prizes and more at the fundraiser.

“The goal this year is to take 20 kids on a hunt. Last year was a building year to make sure it would work,” Willard said. “We were able to host and have a great turnout. All 12 kids got their first deer. We are trying to grow and raise enough money to take 20 kids and hopefully give them the same experience as last year.”

Willard said organizers would like to incorporate a fishing day or other outdoor activities in the future. All the kids who go on the hunts with the Dream Hunt Foundation are challenged in some way and all were Louisiana residents.

Willard started the Dream Hunt Miss-Lou chapter last year after moving from Monroe. He said the Miss-Lou has so many resources and opportunities to give children experiences in the outdoors.

“We can take kids who may not have that opportunity to get outdoors. We can take them on the hunt of their dreams,” Willard said. “We get just as much out of guiding the kids as they do. Anyone is welcome to come help out. We need volunteers, especially with taking 20 kids this year.”

“We have more places to hunt than kids to take. It is a good foundation and philanthropy for our area,” Willard said. “It all takes manpower. For the hunt, we need landowners to help by allowing us to hunt on their property. We try to give a kid the best chance and we try to put them in the best position to harvest a deer. More than anything, we give them a camp experience. The outdoors is our biggest resource and just sharing it is incredible.”

The main sponsor this year for the Sporting Clays fundraiser is Hunters for Humanity, a non-profit organization. Willard said Drew Keeth and Stephen Dawkins play an important role in getting the fundraiser set up.