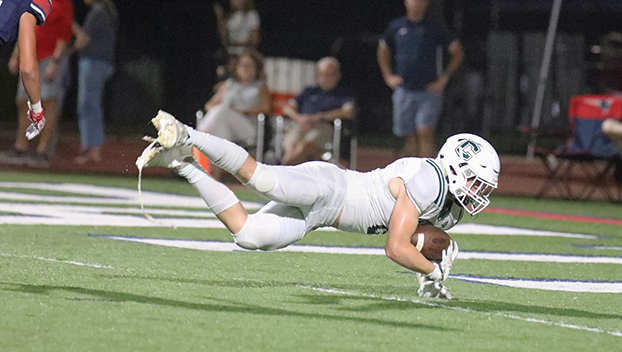 Jake Maples stretches out into the endzone for the Green Wave’s only touchdown in a loss to MRA last week. They look to rebound against Madison St. Joe Friday night. (Jody Upton | Green Wave Athletics)

NATCHEZ — Adams County Christian School (1-0) and Cathedral (0-1) enter Friday night with the same goal in mind, win their home opener. Both schools were on the road last Friday night.

MRA put away the Green Wave with a 50-7 win and ACCS overcame a 7-0 deficit to beat the Brookhaven Academy Cougars.

Sophomore Emile Picarella threw for 156 yards with one interception. His leading target was Tay Littleton who had four receptions for 57 yards and Zay Hard had three catches for 45 yards. St. Joe will likely look to pass as they gained just 58 yards on the ground last week.

By comparison, Cathedral gained 332 yards against MRA. 121 yards came on the ground and 88 yards came through the air. Kaden Batieste returned the ball for 98 yards on kick returns showing his impact on special teams.

Jake Harriston led the Green Wave in rushing with 60 yards and Batieste led the team in receiving with 52 passing yards. They will have to move the ball better to beat Madison St. Joe. Kickoff is at 7 p.m.

Rebels will look for revenge on the Yellow Jackets (0-1) Friday night. AC lost 35-6 to Oak Forest last year in a surprising defeat. Oak Forest might still be reeling from a 27-7 defeat at the hands of Parklane Academy last week.

Parklane moved the ball for 224 total yards last week against Oak Forest. 101 of those yards came through the air and 72 came on the ground. Fumbles were the biggest killer for the Yellow Jackets last week as they fumbled three times and threw an interception.

ACCS had a lot of success last week on special teams with Jordan Berry playing a huge role in flipping the field for the Rebels. Conor Aplin made an impact as an outside linebacker giving the BA offensive line fits.

Terrell Tenner should be back for the Rebels after suffering an ankle injury last week. He had a 51 yard touchdown run which flipped the momentum to AC against BA. His power should be a nightmare for the Yellow Jackets. Quarterback Carter Coleman continued to show his playmaking ability with his legs last week breaking out a 30 yard touchdown run on a scramble.