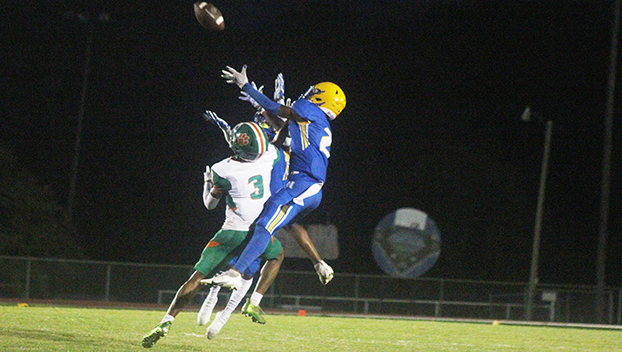 Kameron Carter leaps over a wildcat receiver as he tries to make an interception. He was able to come down with it for Natchez. (Hunter Cloud | The Natchez Democrat)

NATCHEZ — An ice cold Gatorade bath awaited Natchez Head Coach Steve Davis as the running clock ticked away during the final minutes of the Bulldogs 55-0 defeat of Wilkinson County on Friday.

Davis’ son ran onto the sidelines and scooped him up with a smile as Davis won his first game as a head coach at a school he loves.

“I’m kind of speechless right now. I never thought I would be here,” Davis said. “I’m glad I could come back here and get my first win here. It feels great. They guys played well and it feels good.”

On the other sidelines stood first year head coach Christopher Brown. His Wilkinson County Wildcats came into the game with a lot of energy.

Defensively they held Natchez to a punt on the first drive. The second series was a different story.

Kaden Walton, who was reportedly not going to start after dealing with COVID-19, took control of the game as quarterback for the Bulldogs. Walton led the Bulldogs on a touchdown drive that ended with a 12-yard run by Carl McDonald. Walton finished the game with three passing touchdowns and a rushing touchdown.

“It started off shakey,” he said. “We got in a rhythm that second drive, and we did better as the night went on. The offense did what it was supposed to do.”

Special teams helped the Bulldogs. DeMarrco Blanton returned a punt early in the first quarter to give the Bulldogs a two-touchdown lead.

Blanton said when he caught the ball he saw a hole so he started down it. Defenders closed in, but then the hole opened again so he took it down the right sideline for 60 yards.

Blanton scored a second touchdown in the first quarter on a 22-yard strike from Walton. The wide receiver had to dive to make a catch, but turned a negative play to a positive.

“Kaden is special from the way he plays. He was locked in tonight,” Blanton said. “He will be on us if we are lacking in practice. He is special and talented. He has it.”

“We competed all four quarters,” Brown said. “We are going to compete every game. We played a good team. They were more prepared than I thought.”

Natchez clicked on offense for most of the night and kept the Wildcats out of the endzone and off the scoreboard.

Bulldogs Jakel Irving recovered a fumble for Natchez and so did Omari Johnson. Koren Harris had an interception and Kameron Carter had two interceptions. Wilkinson County forced one turnover when Gregory Woodard got an interception.

Davis said the team will focus on eliminating unsportsmanlike penalties before the next game.

“We have a lot of talent. We have to continue to work to work on ourselves. We preach details, and we have some things we have to clean up,” he said.