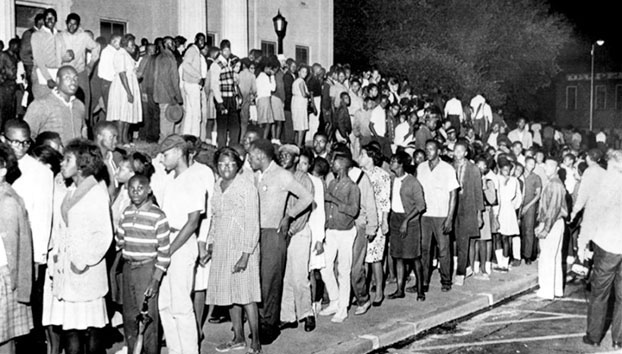 Protestors at the Adams County Courthouse during the civil rights movement in the 1960s. (Photo courtesy of the Historic Natchez Foundation)

NATCHEZ – The Mississippi Humanities Council recently awarded $1,450.00 through a mini-grant to the Natchez Museum of African American History and Culture for the creation of a map of the civil rights movement in Natchez.

The map will be a joint project between the museum and the Natchez Civil Rights Trail Committee, according to Roscoe Barnes III, cultural heritage tourism manager for Visit Natchez. He said the working title of the publication is “Map of the Civil Rights Sites in Natchez, Mississippi.”

Barnes, who also chairs the NCRTC, said the map will be published as a full-color brochure. In addition to photographs, it will include an annotated list of more than 50 sites that played a significant role in the Natchez movement, he said. Design and printing will be done by Catherine Murray of Murray Printing.

“This is another milestone and special gift to the city of Natchez,” said NCRT member Robert Pernell. “This will allow visitors, as well as our local citizens, to literally trace the routes of the Natchez movement and see the sites that made a difference in our history.”

Mayor Dan Gibson said the map will help to tell the full story of Natchez’s history.

“This is great news for Natchez,” he said. “These grant funds will help greatly in our efforts to better tell the entire history of Natchez to include commemorating our African American historic sites. Many thanks to Dr. Roscoe Barnes III, Visit Natchez, Bobby Dennis, the Natchez Civil Rights Trail Committee, and NAPAC for making this happen.”

The listed sites were identified by the Historic Natchez Foundation. Local residents, including former civil rights activists and their family members, also contributed to the project.

Barnes noted the homes of several civil rights leaders and activists in the movement will be listed, including the homes of NAACP Treasurer Wharlest Jackson Sr. and NAACP President George Metcalfe. The home of Nellie Jackson, aka “Mississippi Madam,” will also be included, as will the homes of Mary Lee Toles, Forrest Johnson, Mayor John Nosser, Marjorie Baroni, Jessie B. Williams, Alderman Theodore West, and Mamie Lee Green Mazique, among others.

Other noteworthy sites are the government buildings that played a role in the movement. They consist of the Adams County Courthouse, Natchez City Hall, and Natchez City Auditorium. Churches, parks, and commercial buildings will also be shown.

“This map will be a convenient tool and handy resource for anyone to learn more about the civil rights movement in Natchez,” said Bobby Dennis, executive director of the museum. “We really appreciate this assistance from the Mississippi Humanities Council.”

Barnes said the map will serve as a supplement to the Mississippi Freedom Trail marker that is set to be dedicated this year at 9 St. Catherine St., the site of former NAACP Headquarters, which is commonly known as the Dr. John Banks House.