‘I have big thoughts,’ Black earns perfect LEAP score in English, wants to become an author 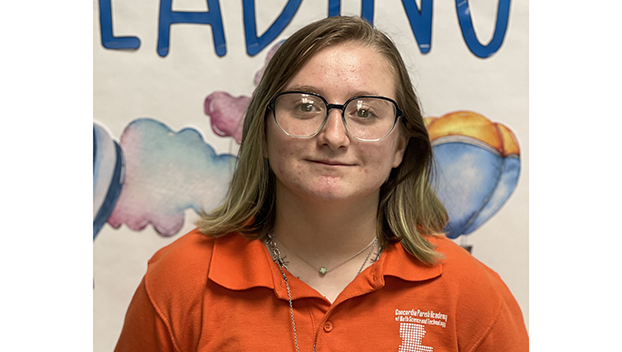 VIDALIA, La. — Meredith Black, a Concordia Parish Academy 11th-grader, said she doesn’t judge a book by its cover, but its thickness.

“In Junior High, whenever we went to the library to pick out a book to read, I would always look through the shelves and pick out the thickest book I could find. I figured if they’ve got that much to say, it has to be good. They wouldn’t just go on and on if they didn’t have a lot to say.”

Black’s passion for reading paid off for her on her English II LEAP exam, on which she earned a perfect score.

“I felt pretty confident about it. I wanted it to be over with because big tests always make me nervous,” Black said.

“She said to me, ‘You need to do better,’ and I told her, ‘I literally could not do any better.’”

Black said, ironically, that she hated reading until she was in second grade. That’s when she became hooked on fantasy novels filled with action, adventure and romance.

Some of her favorite series is The Inheritance Cycle by Christopher Paolini. The novels are centered around the adventures of Eragon, a teenage boy, and his dragon, Saphira.

Black said she aspires to become an author or journalist.

“I’ve been writing my own short stories that I will publish online for people to read and review,” she said. “I like writing stuff that has a deeper meaning about right and wrong or love. I have big thoughts.”

When she graduates, Black plans to continue studying at Northwestern State University in Natchitoches, Louisiana­—where she is currently enrolled in online college courses—or Louisiana Tech University in Ruston.

Besides reading and writing, Black said she enjoys playing Dungeons and Dragons with her friends.

“Everything I did all through junior high, I did because I wanted to be like her or better than her. I was really competitive,” she said. “She is three years older than me and went to culinary school in Natchitoches. I have never wanted to be a chef until she went to culinary school and then I thought ‘Maybe I could go to culinary school. I do like food.’ … One day she said, ‘My little sister is better than me,’ talking about me and I felt complete. I don’t have to go anywhere or do anything else. That was it. I achieved the greatest goal. Lilian admitted that I’m awesome.”