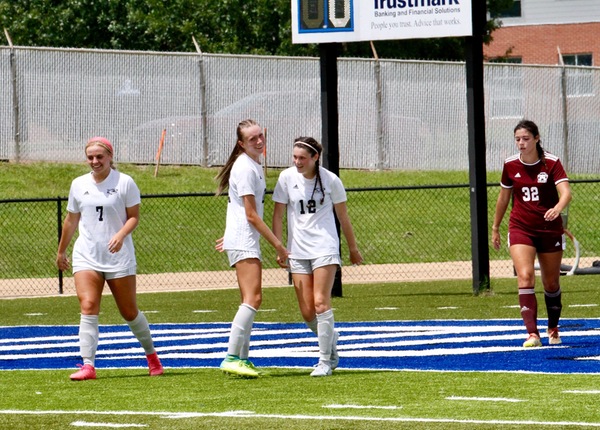 WESSON – The Lady Wolves dominated every part of the pitch on their way to a third straight win to start the 2022 season as they beat the Hinds Lady Eagles, 6-1, on Friday, August 26.

“The girls were excellent during the match,” stated Co-Lin head coach Tom Cosgrave. “We pressed in the right areas and were clinical in front of the goal throughout the match.”

The first goal for the Lady Wolves came from freshman forward Charlie Cooper (Corby, England) beat the Lady Eagles keeper on a penalty kick to make the score, 1-0 in the 18th minute. The Lady Wolves then got back-to-back goals in back-to-back minutes from sophomore forward and Franklin County product Jenna Long (Meadville) as she scored an unassisted goal in the 29th and then scored in the 30th minute with an assist from Cooper to make the score, 3-0.

The final goal of the first half for the Lady Wolves came just four minutes later in the 34th minute as sophomore Taylor Ford (Florence) found the back of the net with an assist from Jenna Long making the score, 4-0, which held throughout the remainder of the first half.

“We have a lot of girls who can step up and score goals for us this year,” stated Cosgrave. “We are very excited about all the options that we have going forward.”

“It has been a great start to the season for us so far,” added Cosgrave. “We aren’t done yet and still have a lot of tough games ahead of us to reach our goals.”

ACCS alumn Madi Cooley has played in three games to start the season. She will return to action on Friday, September 9, hosting Tougaloo College. The action on the pitch will kick off at 12:00 p.m., at Stone Stadium in Wesson.