Rebels endure onslaught of goals, look to bounce back Tuesday 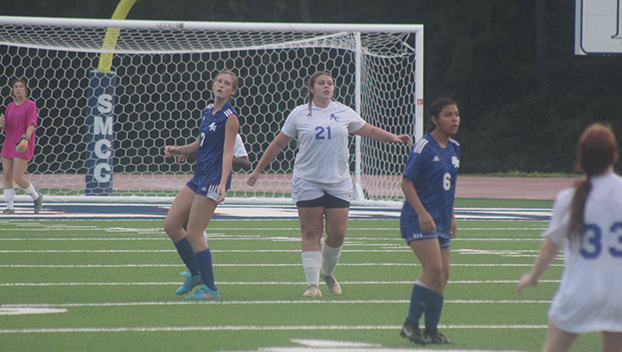 AC Senior defender Claire Williams (No. 21) watches where a ball she cleared goes. AC fell to Brookhaven Academy 7-0 but will hope to bounce back against Copiah Academy Tuesday. (Hunter Cloud | The Daily Leader)

SUMMIT — AC endured a downpour and an onslaught of goals in a 7-0 loss to Brookhaven Academy Monday afternoon. The game was at Southwest Community College in Summit as heavy rains, which dumped nine inches on Brookhaven, have left soggy field conditions.

AC Senior Claire Williams said it was the first time in a week they could get on a soccer field. Rain canceled practice last week, and they could not practice indoors due to scheduling issues.

It showed in their play as they dropped a district match to Brookhaven Academy. The Cougars have kept six clean sheets this season and outscored opponents 26-4 in nine games.

“We have been doing good. Today we were stumped and tired,” she said. “I’m hoping we can recover and learn from this and move forward. We will play Copiah Academy tomorrow.”

AC started its district campaign with an away match at Parklane Academy, which they won 2-0. Against Oak Forest, they lost 4-0 but played a pretty solid game.

The Rebels have had three different coaches in the last three years. Long-time coach Jimmy Allgood retired from coaching in 2020. At the same time, AC graduated a large senior class in 2020, and as a result, Williams said they are in the middle of a rebuild like several district teams.

Copiah Academy will travel to Natchez to play AC Tuesday afternoon. Kickoff is at 5 p.m. Williams told her teammates to go home and think about how they could play better tomorrow in the post game huddle.

“I’m hoping we can learn from our mistakes and think about how to apply ourselves tomorrow,” she said. “I hate that we had two district games back to back. I think we will do better tomorrow. We could apply ourselves more, and we should have built up energy.”