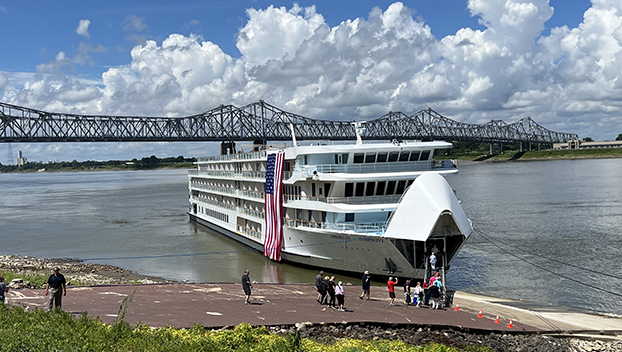 NATCHEZ — On Tuesday, Natchez welcomed a new vessel to its port as the godmother city of the American Cruise Line’s newest ship, the American Symphony.

Furthermore, by 2025, American Cruise Line’s CEO Charles Robertson said he plans to name Natchez the port of origination for the American Symphony.

Next spring, Robertson said American Cruise Lines also plans to introduce a new vessel to the port of Vidalia, Louisiana.

“Watch out New Orleans. Watch out Memphis,” Natchez Mayor Dan Gibson said, highlighting the metaphorical change in tide for the number of ships that would be docking in Natchez and Vidalia. “With our soon-to-be arriving commercial air service, they’ll be coming here to catch the boat.”

American Symphony is the fifth riverboat in the American Cruise Line’s new river cruise series and the 15th small ship built by Chesapeake for the company, Robertson said.

The 175-passenger boat joined the company’s expanding Mississippi River fleet in its maiden voyage from New Orleans to Natchez for its christening on Tuesday. Performing the ceremonial breaking of a bottle of champagne over the bow was 2020 Miss USA and Mississippi native, Asya Branch.

“This is a huge economic development opportunity for us,” Lt. Governor Delbert Hosemann said. “But the most important thing is it will bring people to see our people and when they do they’ll bring their people back to see us again. Congratulations to all of you, we’re so proud to see the American Symphony launch here and if things go well, we’ll soon have the bridge lit so you can also find your way home.”

Brennan, a New Orleans restaurateur, said he first met Gibson on a river cruise a couple of years prior and has returned often since because they’ve become good friends.

“I’ve loved Natchez and have been coming here for years,” he said, recalling a time when he cooked at the Eola for a fundraiser in the mid-1990s.

Also joining the celebration through a recorded video was Mississippi Gov. Tate Reeves, who said, “Natchez boasts one of Mississippi’s fastest-growing economies.”

“In 2021 alone, visitors spent nearly $100 million, resulting in $1.5 million in tourism tax revenue, over $10 million in state and local taxes and 1,400 jobs,” Reeves said of Natchez. “Becoming a port of origin is playing a huge role in bringing commercial air service back to Natchez and providing additional opportunities for us to strengthen our hospitality sector. That is why I’m also excited to hear that by 2025, American Symphony anticipates calling the Natchez’s port home and in turn will bring more people to visit the state we all know and love.”

While acknowledging all of the stakeholders who contributed to Tuesday’s festivities, Gibson also thanked God.

“What is happening in Natchez is truly miraculous. We call it the Natchez renewal. It is a Natchez renaissance. Deep in my heart, I know it is because we put him first and he is blessing our city in ways that we never imagined,” he said.