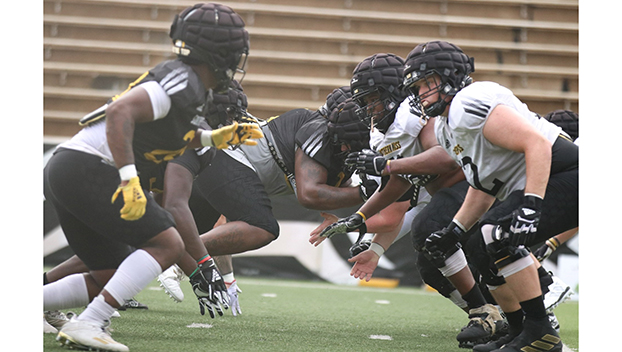 HATTIESBURG – Southern Miss football coach Will Hall said his team put the pads back on during its Friday morning workout as the Golden Eagles now sit just a week away from its season opener at home against Liberty.

In the session, Hall said that the practice showcased some good work from some of the younger players, as well as in the special teams in both the kickoff return and in the punting phases.

With only a week out from the season opener, Hall was asked about what he thought about his team at this point heading into the year. Hall said his thoughts started with continued improvement, which his team has shown since last spring through now fall camp and what he expects to see through the 2022 season.

“We are a team that is going to be much better in December than we are right now,” said Hall. “We don’t want to waste any days. You can see our young guys, who I just talked about, that are getting better every day. The more we play football the better we get at it and (just show) continued improvement.”

WJTV reported Hall said Adams County Christian School Grad Jakarious Caston would have a breakout season for the Golden Eagles. Caston plays Wide Receiver and caught his first touchdown pass last year. He is a junior and is predicted to make a huge contribution to the program this season.

The Golden Eagles will utilize its mock game on Saturday before taking Sunday heading into game week preparation.

Season, as well as, single game tickets are available for the 2022 home schedule by visiting SouthernMissTickets.com, by calling 1-800-844-TICK (8425) or by visiting the Pat Ferlise Ticket Office, weekdays, during normal business hours.