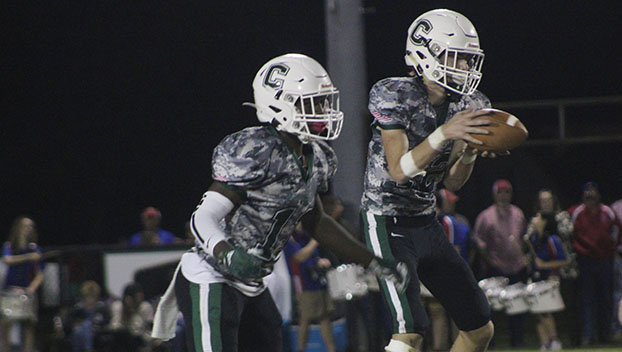 The Crusaders are down to 12 men after starting the year with about 20 varsity players.

Due to the loss in manpower, Park Place Christian made the decision to forfeit their game against Cathedral and forfeit the rest of the season. As a result, Darbonne is scrambling to find an opponent to play this Friday.

“I know it was a big decision for Jason Cook. He does things the right way. It is tough for the school, and I know he didn’t take it lightly,” he said. “Right now, I have no one to play.”

Oak Forest Academy has an open week but is an important district matchup so the teams coaches decided not to move the future game. Darbonne said Wayne Academydeclined to play  while public schools such as Biggersville and Independence are too far away from Cathedral. Amite County was too banged up from a game against Jefferson County last week.

“Right now we don’t get any power points from it. We don’t get forfeit money, and I’m stuck without a home game,” he said. “We needed that game against a 5A school for the power points and playoffs. Even if we find a public school to play it won’t help us with power points. I am trying to figure it out.”

He eet with the team yesterday and told players he was exploring options to remedy the situation. This same situation happened his first year at Cathedral as Brookhaven Academy had dropped to 12 men due to injuries with two games left in the year. The Cougars forfeited the rest of the season.

Darbonne said he is not sure what the plans are for the Military Appreciation game. It could be moved to another home game but the remaining home games are designated for Pink Wave, Homecoming and Senior night.

Right now, he does know his options are limited. LHSAA does not allow its member schools to play teams in the MAIS so Vidalia, Ferriday, Delta Charter and other schools are already out of consideration. None of those schools had an opening this week anyway.

“We will try to practice this week. We don’t know who we are preparing for. We might just be getting ready for Parklane Academy on Sept. 6,” he said. “I know we have limited options. I just hope the ones on the AD board can help get us the power points back. They are needed for the playoffs not just for me but other schools.”