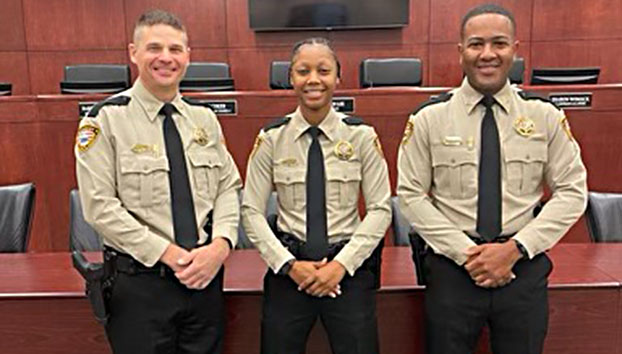 “That’s our target market, what we are aiming for,” Patten said. “We are looking for people who want to be here.”

“We have tightened our screening process,” Patten said. “Recruits go through a law component, educational and physical components before we send them to the academy. We have been getting lots of feedback from officials at the academy about how well prepared out recruits are.”

The Adams County Sheriff’s Office pays for the classes for its recruits, but the state later reimburses Adams County for the cost of the training.

While many law enforcement agencies have a significant number of open staffing positions, Patten said the Adams County Sheriff’s Office at the moment has only one open position in the entire department.

“We look through their pages to see first if the person has the personality and characteristics we want in our office,” Patten said.

He said recently, his office has focused on recruiting social workers.

“It is difficult to get jobs in social work. When someone is hired for a social work job, they stay in that job typically until they retire. There’s just not an abundance of social work jobs available,” Patten said. “We are trying to sell people on the social work side of law enforcement. We don’t just enforce the law. We have to be community-minded. People love to say that those with mental health issues don’t belong in the jail and they shouldn’t be the responsibility of law enforcement. That’s true. However, often there are not other options. For a deputy who has knowledge of social work, they are trained to de-escalate the situation and they know what services are available and can plug them in. When you have that, you’ve got almost the perfect officer.”

Starting pay for a new deputy at the Adams County Sheriff’s Office is $16.01 an hour. After training is completed, the deputy is bumped up to $16.81 an hour.

Stroud, Mayberry and Hunt come from unique backgrounds. All three are taking a pay decrease to join the sheriff’s office.

“Stroud was a diesel mechanic. He watched the Adams County Sheriff’s Office over the years. He saw what has been going on in the community. His kids go to public school here. He is one of those people who came forth and said I want to make my community safer for my family. He chose to change professions to do that. He chose to serve,” Patten said.

Hunt and Mayberry come to the sheriff’s office from the corrections industry.

“All three of them were making more pay at their previous employment than they will be starting out, but all chose to serve. All three said they have a calling and want to serve in an impactful way,” he said. “What is most important when recruiting is bringing in people who have the character attributes that enhance what we already have in the Adams County Sheriff’s Office family. A person’s character is what is most important.”