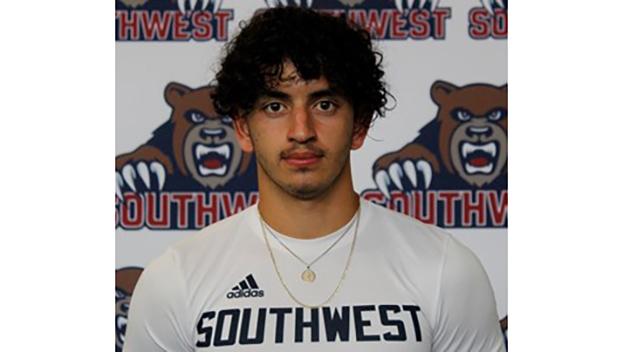 The Bears got a goal and an assist each from sophomores Jordan Jones, Franco Fasoli and Jamie Chamberlain in a 5-1 home win over Hinds.

“It was nice for us because we have been working on things and trying to find opportunities to show off what we have practiced and they came tonight,” SMCC head coach Zach Mills said. “We executed well.”

AC alumnus Juan Boteo saw action in the game and recorded his first stat of the season when he was shown a yellow card. He is in his sophomore year with the Bears.

Following a near 14-minute period to open the game, where both the Bears (1-0) and Eagles (0-1-1) were jockeying for position, the hosts struck first when Chamberlain sent the ball about 80 yards down the field, just enough to be run down in the corner by Jones who sent it past the Hinds goalkeeper putting the Bears on the board first.

“I just kept my head down,” Jones said. “For me, I just want to be the hardest worker on the team. I kept running and just hit the back of the net and got the first goal.”

With less than a minute to go in the first half, a heads-up play by Cody Collins resulted in another score. Collins got fouled with :38 seconds to go and even though he didn’t score on the ensuing free kick, Chamberlain was there to put the rebound in, making it a 2-0 lead for the Bears.

“I said to Cody, as long as you get it on target and the keeper fumbles, someone will be there and luckily I managed to keep myself onside and put it in the back of the net,” Chamberlain said.

Not long into the second half, Southwest found even more success from a different player. Kaleb Jones used his speed to get past his defender taking a well-placed ball from Southwest goalkeeper Cooper Odum and put it in the net giving the Bears a 3-0 lead.

Already feeling it on offense, it didn’t take long for the Bears to add another score. Jade Baartman joined the scoring fray getting a nice pass from Fasoli before rocketing the ball into the net increasing the lead to 4-0 at the 33:09 mark in the second half.

The lone Hinds goal came six minutes later on a penalty kick but it Southwest responded shortly afterward. Just three minutes later, Fasoli found himself on the scoring end this time around, getting the assist from Jones capping-off a big night for the Bears.

In the goal, Odum finished with six saves for the Bears.

Southwest returns to action Friday with a road contest at Meridian at 2 p.m