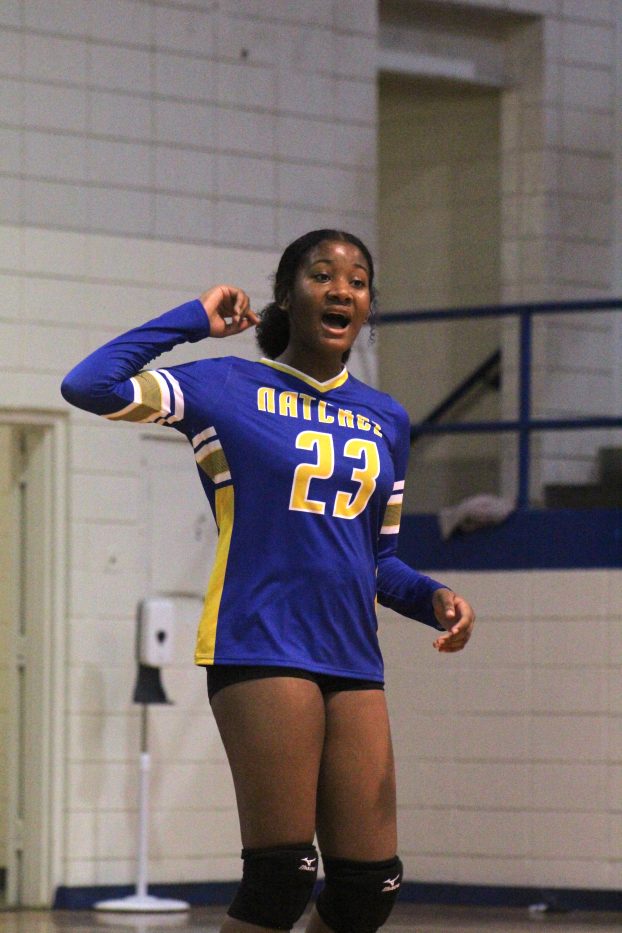 NATCHEZ — After starting the season 0-6, Natchez took a match over Amite County Tuesday night. The Bulldogs won three sets to earn the win and head coach Jamal McCullen was pleased with the result.

Until the match Tuesday night, Natchez had won just two of the 20 sets they played. McCullen said he felt his squad were playing better volleyball the last three matches so it was nice to get the win over Amite County.

“It was exciting to see the girls get a win. They played well and fought hard,” he said.

Natchez is in its second season as a volleyball program. McCullen’s junior varsity is 3-4 this season and are looking strong. He is excited about their future and the future of the varsity Bulldogs.

The biggest improvement for Natchez is their consistency in play and the transition to a system based offense. Last year, they tried to keep the basics and get the ball over the net. Girls played the position they were at on the court.

He said the girls are grasping the elements of running different systems or rotations. They are starting to understand the intricacies of volleyball and moving forward to the future of Bulldog volleyball. His squad are starting to see players play special roles and as a team they are pretty well rounded.

“The good part is we are getting comfortable. The next step for us was to play out of the system,” he said. “In volleyball, the ball takes you out of the system sometimes and requires you to move into an emergency system. We haven’t learned how to get back to our system. It comes with learning.”

It is exciting to watch his team grasp the systems in volleyball. He is excited about the path the team is taking to get better. Right now, he has a handful of girls training to be liberos but they will not play in the position until they are ready and McCullen understands how to properly utilize a libero. They are players who can substitute at any time for players on the back row.

Additionally, Natchez will have to order different colored uniforms for the liberos because the position has to wear a different color than the rest of the team.

“Jakayla is a natural. She just powers the ball over and she has been awesome,” McCullen said. “Olivia Davis came back and her serve was awesome too. When they go up to serve, the team’s confidence goes up. We have some ladies who are specializing in setting too.”

Natchez has multiple matches against Crystal Springs, Hattiesburg, Port Gibson, South Pike, Brookhaven and Vicksburg to close out the season. McCullen said he wants the varsity team to win a large percentage of those games. They are capable of doing so.

“If we play our best ball I think we could get more wins. Our match against Brookhaven is our truest measurement,” he said. “We match up well with them. They started when we started. It is a school our size too. Cach Grey taught me a lot so I’m excited about playing them again this season. I’m hoping to get at least six wins. That is what I’m coaching for. Anything better would be great. I know we will be competitive.”