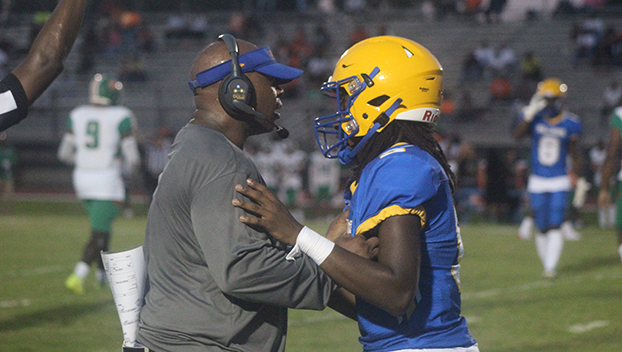 Natchez Head Coach Steve Davis talks to Kaden Walton during a timeout last week against Wilkinson County High School. The Bulldogs look to improve to 2-0 when they face the Jefferson County Tigers who also have a chance to go 2-0. (Hunter Cloud | The Natchez Democrat)

NATCHEZ — Coming off impressive shutout wins over rival schools last Friday night, the Jefferson County High School Tigers and the Natchez High School Bulldogs will each look to go to 2-0 on the season when they face each other Friday night.

Kickoff between rival Jefferson County and Natchez High at Tom F. Williams Memorial Stadium is scheduled for 7:30 p.m. The Class 3A Tigers started off their season with a 30-0 win over the Class 2A Amite County High School Trojans 30-0 while the Class 5A Bulldogs began the Steve Davis era with an emphatic 55-0 win over another Class 3A team in Wilkinson County High School 55-0.

Davis said he was impressed with the defense, but he would like to see his offense play faster than it did last Friday night.

“How we rallied to the ball. Stopping the run, which is our main focus,” Davis said. “Offensively, after the first two series, we played with a great tempo. We were able to run the ball, which was our game plan. We still need to focus on lining up right. We played fast, but we didn’t play fast enough.”

Davis added that he wants the defensive line to be more aggressive this Friday night against Jefferson County than it was against the Wildcats. He also said that quarterback Kaden Walton did a good job running the offense, but there is still room for improvement in some areas.

“Defensively, we have to get more out of our front four guys,” Davis said. “His first game, once he settled in, Kaden, he ran our offense. He threw the ball well. But held the ball too long at times. He forced some passes at time. Overall, he played pretty well. First game playing varsity football, being a sophomore, I’m pretty much pleased with it.”

Jefferson County comes into this game with a lot of momentum on its side following its win at home over Amite County. The Tigers will have to bring that same energy on the road if they are spring an upset over a larger team in the Bulldogs.

There are some things about the Tigers that Davis is concerned about heading into this game between rival schools that are only about 30 miles apart.

One match-up Davis said the Bulldogs have the decisive edge is between their wide receiver and the Tigers’ secondary. He is also counting on big games from several players for them to come out victorious Friday night.

“My wideouts, that’s where we’ll have our biggest advantage. Our wideouts versus their secondary. Mike Williams, Kenyan Chatman, Demarrco Blanton, and Ca’Ron Williams,” Davis said. “I’m expecting a big game from Jakel Irving, Omari Johnson, and Troy Jones. That’s on the defensive side of the ball. Offensively, Traylon Minor and Carl McDonald Jr.”

Davis said he expects there to be a lot of energy in the stands with the two schools’ fan bases throughout the game Friday night.

“There’s been a lot of talk. There’s been more talk this year than in previous years. High energy. A lot of electricity in this Friday night,” Davis said.