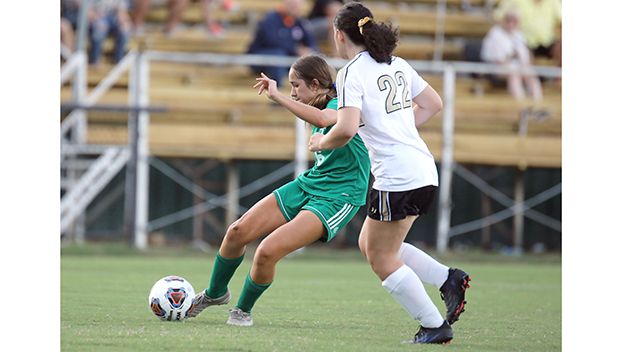 Before kick-off, Hogue met with the Oak Forest coach and referees at the center circle. Oak Forest’s coach asked Stuart Sellers, MAIS Soccer Assigning Secretary for region 7, what the plan was if they had any issues with the weather, Hogue said.

Sellers told them the rule was whoever was leading at halftime would be the winner if play could not continue in the second half due to weather conditions. Hogue said he did not think the conversation would matter.

“It was a beautiful day. I did not think much of it. Stuart asked if we have someone who could track lightning, and our trainer has an app to do it on her phone,” he said. “She has stopped practices before because of lighting. Stuart asked Oak Forest’s coach if it was okay for her to be the lightning tracker, and she said yes.”

Cathedral and Oak Forest were locked in an intense match in the first half of play. Play moved back and forth with end-to-end action. Hogue said the scoreline could have been 3-2 in favor of any school but at the half finished just 1-0.

Maddie Verruchi received a beautiful pass down the sideline. Entering the box, she drove towards the goalkeeper, drawing three defenders to her. It was uncharacteristic for the Yellow Jackets defense as they left Lillie Bertelsen unmarked on the back post.

“They all challenged Maddie thinking she was going to come to the goal. We had just worked on crossing to the backside this week in practice,” he said. “She laid it across, and Lillie was there to knock it in. It was a great goal. It was like watching a clinic. It was so pretty to watch.”

The goal advantage for Cathedral would come into play in the second half. Hogue said he had noticed ominous clouds, cooler temperatures and wind as the teams played on. Cathedral committed a foul in a dangerous area, but lightning struck six miles from the field before Oak Forest could take the free kick.

Cathedral’s trainer told Hogue. He then informed Sellers of the lightning strike, and he informed the center official. The referee asked Hogue if he wanted Oak Forest to take the free kick, but he said no.

“The safety of the girls is more important, and the letter of the law says once lightning strikes within 10 miles you have to stop for 30 minutes and seek cover immediately,” Hogue said.

Both teams waited for 30 minutes, but heavy rains, lightning strikes and bad weather kept them in the locker rooms until about 9:15 p.m. Sellers informed them the game was getting close to being called off.

He said the Cathedral’s administrator asked them to stop the match with the field in such poor condition with four of the field’s corners were inundated with water. Hogue told Sellers it would be the referee’s call. Oak Forest’s coach wanted to wait it out but as they met in ankle-deep water lightning struck again.

“It was out of my hands and it was a little unsatisfying to win that way. The way it fell was a bit satisfying. I would have never known about that rule had she not brought it up,” he said. “Oak Forest usually has our number. I wonder what would have happened if we could have played it out. We were playing well, and I enjoy a good match, win or lose.”

Cathedral’s win gives them an undefeated advantage in district play as they play the Brookhaven Academy Cougars in a district match Thursday afternoon. Kickoff will be at 3:30 p.m. in Natchez.

A phone call to confirm if the match counts as a district win was unanswered by the MAIS Athletic Office Wednesday. This story will be updated if there is one.