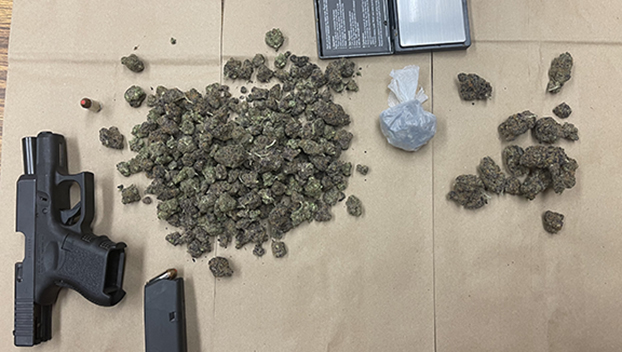 NATCHEZ — Natchez Police seized 122 grams of marijuana and a gun during the arrest of a Natchez man outside the Citgo gas station on U.S. 61 on Tuesday.

The arrests came after the successful execution of operation TBONE, or “Take Back Our Neighborhoods, Natchez Police Chief Joseph Daughtry said. This is a collaboration with NPD and Mississippi Bureau of Narcotics to take guns and weapons off of Natchez streets, he added.

“We’ve had several reports of different drug activity and we have been paying close attention,” Daughtry said. “Now, we’re starting to move on it.”

Brodrekus Williams, 27, has been charged with felony possession of marijuana with intent to sell and possession of drug paraphernalia with a firearm enhancement.

He was seen by officers at the gas station at approximately 4:30 p.m. Tuesday, “in the process of packaging marijuana for sale in broad daylight,” Daughtry said.

The weapon has been sent to the crime lab to determine whether or not it may have been reported stolen, Daughtry said.

Brodrekus Williams’ brother, Xavier Williams, 25, who was reportedly in a vehicle with him, and their mother Temeka Williams were also arrested for disorderly conduct and failure to comply with officers. Temeka Williams reportedly arrived at the scene after being contacted and was given several commands from officers that she did not comply with, Daughtry said.

“I understand parents love their children but when our children make mistakes, they have to own up to them,” Daughtry said.

The brothers are scheduled to appear before Judge Lisa Jordan Dale in Natchez Municipal Court on Wednesday morning.