Rebels bounce back with impressive play against Colonels 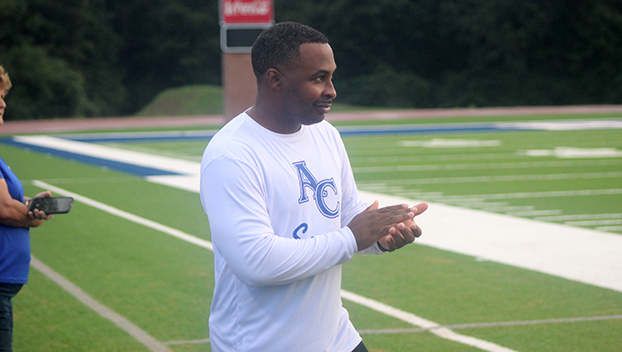 Chris Hughes encourages his team from the sidelines in a match against Brookhaven Academy on Monday. The Rebels played better against Copiah Academy and won 4-1 Tuesday night. (Hunter Cloud | The Natchez Democrat)

NATCHEZ — Adams County Christian School bounced back from a 7-0 defeat to Brookhaven Academy on Monday with a 4-1 win over Copiah Academy Tuesday night. The Rebels could not finish the second half due to lighting but head coach Chris Hughes said he believes it was a district win.

Hughes said Ella Wilson scored two goals, Mallory Mcilwain and McKenzie Campbell scored a goal apiece. It was an important game for the Rebels to get back on track after losing to Oak Forest and Brookhaven Academy to start the season.

They are now 1-2 in district play. Claire Williams said the team needed to come out and play with better attitudes and communication against Copiah Academy. Hughes said they played with passion, communicated and worked as a team in the win.

“They looked a lot better and moved the ball around by making passes,” Hughes said. “We could have scored more goals if we wanted to. We had our chances but didn’t convert. Compared to Monday, it looked 100 percent better.”

ACCS shifts its focus to a match against Parklane Academy next week. Hughes said the main goal is to get back into a routine after rainy weather disrupted practices the last week and a half.

They need to get into practice to work on positioning and their touch. He said if the squad plays like they did against Copiah Academy the next time they play Brookhaven Academy, it could be a closer match.

Brookhaven Academy and Oak Forest are the district favorites, but AC hopes they can close the gap and finish at the top.

The Rebels have younger players such as Kiersten Hughes, Haley Smith, Riley Merriett and Misty Blackman stepping up on the defensive back line. Up front, Maddie Donaldson, Kate Marks, Sheila King and Campbell Robinette have played well too.

“They should all be playing JV, but we only have about 19 girls. They are having to step up and play varsity soccer,” he said. “They have done everything we asked of them. We have a lot of young girls having to step up, and our senior leaders have done a good job. I think we have a chance to make the playoffs.”

A phone call to confirm if the match counts as a district win was unanswered by the MAIS Athletic Office Wednesday. This story will be updated if there is one.