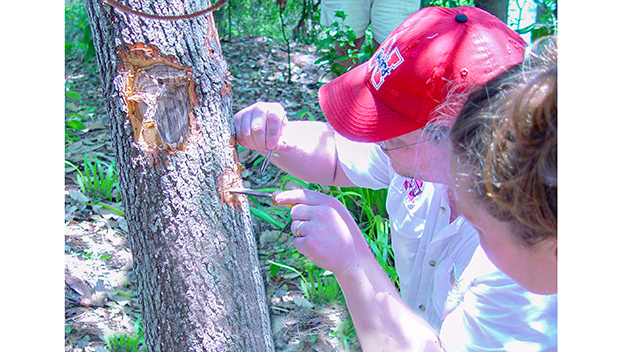 STARKVILLE, Miss. — A few sassafras trees across Mississippi have started to show signs of dieback, and Mississippi State University is asking for help in identifying affected trees.

The trees are suspected of having laurel wilt, a disease caused by a fungus that has already proven deadly to the state’s redbay trees. The fungus is carried by the redbay ambrosia beetle, an invasive species native to Asia.

Laurel wilt and the redbay ambrosia beetle were first detected in Mississippi in 2009. The beetle and the fungus it carries have caused extensive mortality to redbay trees across Mississippi, as well as in South Carolina, Georgia and Florida.

In July, the Mississippi State University Extension Service Plant Diagnostic Laboratory was contacted regarding sassafras trees in the state dying from what is suspected to be laurel wilt.

John Riggins, a professor of forest entomology in the MSUDepartment of Biochemistry, Molecular Biology, Entomology and Plant Pathology, documented the first report of laurel wilt on sassafras in Mississippi in 2011 in the American Phytopathological Society’s journal, Plant Disease.

“There are quite a few reports of it in sassafras in other states, even further north than Mississippi,” said Riggins, a researcher in the Mississippi Agricultural and Forestry Experiment Station.

“The assumption is that once it ran out of redbay or moved north out of redbay territory, it would wipe out the sassafras,” he said.

That appears to be what is happening, and experts are asking for landowners and concerned citizens to help by reporting dying sassafras trees.

“I’m sure it is extensive in sassafras in Mississippi by now, but unless people report it, we have no way to confirm and track it,” Riggins said.

As of Sept. 1, the Plant Diagnostic Laboratory had not yet received a sample of a dying sassafras tree. However, Clarissa Balbalian, lab manager and diagnostician, said she expected to see one soon.

“I am receiving an increasing number of calls about dying sassafras throughout Mississippi,” Balbalian said. “I have not received any physical samples in the lab to confirm, but the problem is most likely laurel wilt, which is a fungus vectored by a small nonnative beetle.

“As the beetle spreads, reports of sassafras dieback have been increasing throughout the Southeast, and it makes sense that the disease is progressing through our state as well,” she said.

The lab that Balbalian manages is part of the National Plant Diagnostic Network — or NPDN — which is primarily composed of plant diagnostic laboratories located at land-grand universities such as MSU. In Mississippi, diseased or insect-damaged plant tissues come through this lab, where they are diagnosed, and that information shared among the nationwide network.

“One purpose of this national network is to be on the lookout for new and emerging problems,” Balbalian said. “NPDN can alert network labs and partners, similar to what the Centers for Disease Control and Prevention do for human pathogens.”

Monitoring for this disease and other plant problems is everybody’s job.

“Every citizen of the state is what we call a first detector,” Balbalian said. “You’re the eyes on the ground, and you will see something first and be curious about it.”

Anyone who notices a plant or tree with an apparent problem is encouraged to contact their local county Extension agent or the Mississippi Department of Agriculture, Bureau of Plant Industry for assistance.