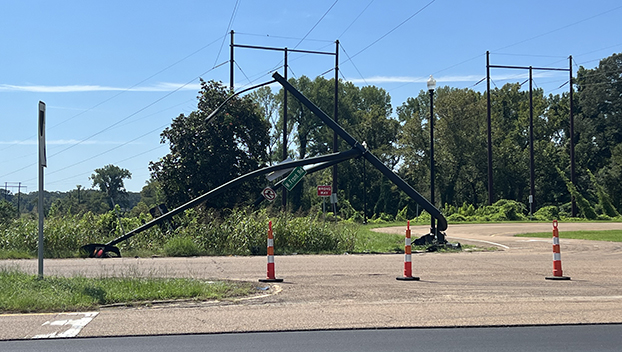 A traffic signal was accidentally knocked over by workers contracted by MDOT in late August and has remained grounded ever since. (Sabrina Robertson | The Natchez Democrat)

Editor’s Note: An earlier version of this story incorrectly identified the workers that knocked down a traffic light on U.S. 61. MDOT contracted with APAC MS Inc., whose driver hit the pole. This story is updated with the correct information.

NATCHEZ — A traffic light on U.S. 61 North near Pedro’s restaurant in Natchez was reportedly knocked over by workers contracted with the Mississippi Department of Transportation as they were working on a street overlay project on Wednesday night.

MDOT has been working nights to pave U.S. 61 in the area of the overpass by Natchez Walmart close to where the traffic light was knocked over.

Natchez Police Chief Joseph Daughtry said that after 8 p.m. Wednesday, a dump truck accidentally backed into the pole of the traffic light. No one was hurt during the incident, he said. An MDOT spokesperson said APAC MS Inc. was contracted by MDOT for the street overlay and accidentally hit the traffic light pole.

The exit where drivers cross the highway is temporarily closed until all signals are working again, MDOT states. No estimated time for restoring the pole was available.

MDOT workers are out repairing the damage, Daughtry said, adding drivers should exercise caution. Those who don’t may get a ticket.

“Please slow down,” he said, cautioning drivers. “We will be enforcing speed zones in the work area.”