‘A dog fight,’ Natchez comes from behind to beat Jefferson County 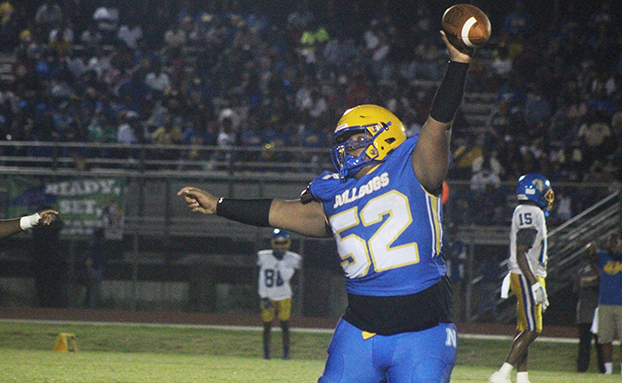 Landen Sewell celebrates a forced fumble and recovery he made in the second quarter. The big play stopped a Jefferson County drive. Natchez would go on to win 14-8 after scoring two touchdowns in the fourth quarter to win the game. (Hunter Cloud | The Natchez Democrat)

NATCHEZ — Natchez was scoreless for the first three quarters against Jefferson County before  Kaden Walton found his footing, leading the Bulldogs to a 14-8 win Friday in the Blue and Gold Classic.

Natchez scored as Walton faked a punt then tossed a 30-yard pass to Demarrco Blanton, who jumped with his back parallel to the ground and came down with the catch.

Senior center Landen Sewell watched the play unfold from the line of scrimmage.

“I saw it. It was a great catch, one of the best catches I’ve ever seen,” Sewell said.

Sewell made a big impact for the Bulldogs, playing both ways for the majority of the game on the line. Natchez Head Coach Steve Davis’s conditioning this summer prepared Sewell for a long day on the field.

“Those were the longest 10 seconds of my life. It was like how the game ended in 9th grade but this time we came out on top,” he said. “In a rivalry game anything can happen. We showed it tonight. It was a dawg fight and we fought to the end.”

Watson gave his team a fighting chance with a big touchdown in the third quarter which put pressure on the Bulldogs. A quarterback rollout, Watson used his legs to find Luke Bolin in the back of the endzone.

“I launched it and he went and made the catch. I was trying to win it for my team,” Watson said. “The defense played a great game. I just have to step up for them and have their back. We want to go to state. We have the team to do it.”

Jefferson County took a lead in the first half after the Tigers’ defensive front blew up a run in the endzone. The play resulted in a safety.

In the scorned quarter, Jefferson County started to march down the field but Sewell made a hit on the running back and stripped the ball.

He recovered his own forced fumble and wheeled away in celebration. Teammates swarmed him as he held the ball in the air and pointed to the endzone.

“It has always been a dream of mine to take one to the house,” he said. “That was the next best thing. I got my name called over the intercom. We needed it badly.”

Natchez (2-0) hosts Lawrence County next Friday and Jefferson County, (1-1) is at Crystal Springs.