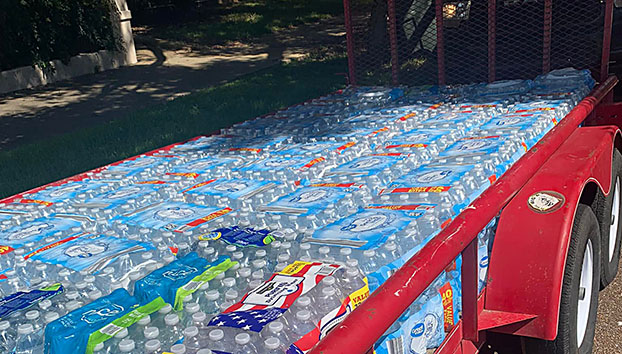 Natchez residents collected more than two trailers filled with bottled water in less than 24 hours. Residents dropped off water at the Main Street Fire Department, which was delivered to a drop-off location at Metro Center in Jackson. Jackson residents are facing a water crisis as its municipal water system has failed. (Submitted)

NATCHEZ — A number of Natchez organizations are collecting donations and bottled water for the people of Jackson, whose municipal water system has shut down.

“I got a call on Wednesday at 3 p.m. telling me the mayor wanted this to happen and when he wanted it to happen and we got to work,” Arrington said. “We owe a big thanks to the citizens of Natchez for coming out and bringing stuff. We never would have made that volume without the help of the citizens.”

Arrington said he and Natchez Police Chief Joseph Daughtry are talking about collecting water again for Jackson resident in two or three weeks.

“We want to monitor the situation in Jackson first and determine what is most needed,” he said.

“Regardless of the cause of a crisis, it is almost always the innocent who suffer,” said Allen Richard, president of The Rotary Club of Natchez. “Our neighbors to the north in Jackson are definitely in crisis and are suffering.”

Several Natchez and Adams County churches have come together to collect and send water to the Jackson area, Richard said.

The water collected in Natchez will be transported to the Hinds County Sheriff’s Office for distribution.