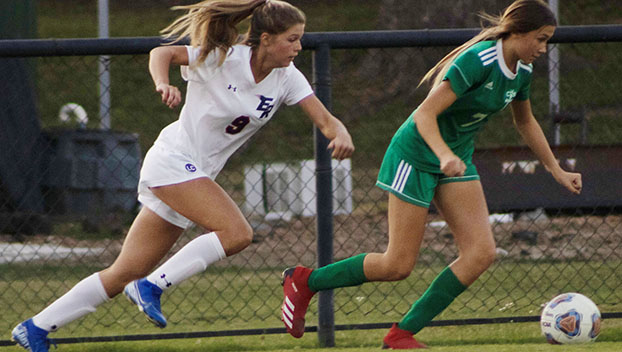 NATCHEZ — Cathedral (2-0 in district) opened the scoring in a district soccer match against Brookhaven Academy (2-1 in district) Thursday afternoon. Maddie Verruchi scored a hat trick of goals on her birthday to give the Green Wave a 4-1 district win.

Her cousin Lillie Bertlesen opened the scoring by connecting with a cross and looping it over the keeper for a goal to give the Green Wave a 1-0 lead. Bertelsen’s goal stopped Brookhaven Academy from adding their seventh shutout this season. Before the match, BA had outscored opponents 26-4.

At the final whistle, head coach Dennis Hogue went around to his players and gave them fistbumps for their effort. It was an upset as the talk around the district was BA was a strong favorite, he said.

“I told Maddie to go out and have her best birthday. Everyone said BA was the team to beat,” he said. “She said she would. The team was inspired, and they stepped up their game. Before the match, they said they wanted to keep the scoring to a minimum.”

Cathedral’s back line did play deep and did not hold a high line to give. Hogue said his team worked hard in midfield to control the match. Despite having a disadvantage with speed, Cathedral defenders did a great job covering for one another and mitigated chances on goal in the first half.

Brookhaven Academy struggled to win 50/50 balls in midfield, which allowed Cathedral to turn on the counterattack and create scoring opportunities. BA head coach Alex Brown saw his squad get into the attacking third but struggled to carve any chances out of those attacks.

Cathedral controlling the midfield was vital to the first-half defensive performance.

“Everyone was doing their part, and I was super pleased,” Hogue said.

BA responded to open the second half, winning the ball from Cathedral immediately from kick-off and applying pressure in the attacking third. The Cougars were rewarded for their efforts with a goal fumbled over the line on a corner kick delivered by Karen Hernandez.

Reagan Fortenberry had a chance to score a goal on a breakaway in the second half but could not get the ball out from her feet. Cathedral took the ball 100 yards down the field, and Maddie Verucchi created an opportunity, but it was saved.

Late in the match, Verruchi ran down the left side of the Brookhaven Academy defense and fired a shot over the goal. As she walked back into position, the Cougars kicked the goal kick straight to her, and she slotted her shot into the right corner to give Cathedral a 2-1 lead. It was a gift, Hogue said.

Verruchi capped off the game with a third goal as her cousin Bertelsen laid off a thru ball for her. The pass checked up with backspin and allowed her to get around the keeper. In the dying embers of the match, Verruchi added her third goal of the evening on a breakaway chance to make it 4-1. Hogue had moved her around in the formation to give his team a tactical advantage.

“In the first half I started Maddie in the middle and asked her to control the ball and find options,” he said. “Later on in the game, we saw opportunities in other places. They didn’t threaten that much, so I moved her up top. I like to change things up and keep the defense guessing.”

Similar to their win over Oak Forest, Cathedral utilized a lesson they learned in practice to exploit the Cougar defense. This week they worked on crossing to the back post and using the wings to launch counterattacks.

Hogue said a lot of times teams will stay in the middle of the field to protect the goal, which leaves the wings exposed. They played the ball down the flanks and saw how well it helped their attack, he said.

With six games left in district play, Hogue is not thinking about the prospects of the playoffs yet. He did say the win delivered a healthy dose of confidence to his young side.

“I know every game going forward everyone will play with confidence and we feel like we can win,” he said. “I noticed in the locker room there was more pep in their step, and everyone was happy. I told them in the group chat ‘The word is out, Cathedral is the team to beat. We put a bullseye on our back, but we have what it takes.’ They have more confidence now, and they are as good as anybody.”