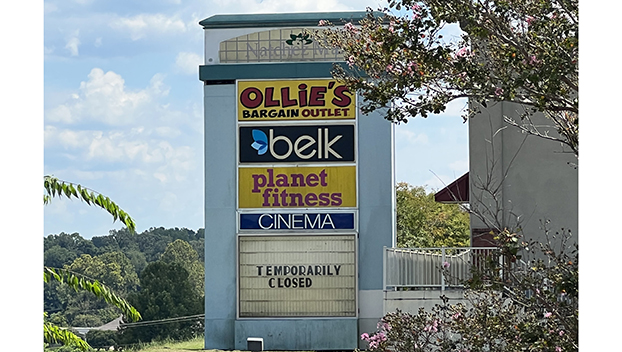 Since 2020, no movies have been shown at the Natchez mall. A sign at the front of the property says “temporarily closed.” (Sabrina Robertson | The Natchez Democrat)

NATCHEZ — The Natchez Mall has taken on a different appearance over the past few months.

Since the announcement in April of plans to turn the building into an outdoor shopping center, interior stores have moved to the front of the building or to other parts of Natchez. A lone mall tenant, Cato, maintains a store inside without an exterior entrance, said Evan Smith, who is the asset manager for AZT Corporation.

“Our long-term plan is to create more of an outdoor shopping center,” Smith said. “That isn’t complete yet. We still have a tenant operating within the mall.”

Belk’s two outside entrances are nearly finished taking on a new look and work will continue on the mall’s main entrance, Smith said.

“We should be done within the next two weeks constructing two new grand entrances to Belk and we’re doing the same for the main entrance, but instead of an entrance, it will be new spaces for retail tenants. It will be repainted and Belk is going to get a similar refresh.”

Since Hibbett Sports moved from the inside to the outside of the mall, the store has seen a “big lift to their business,” Smith said. Furthermore, Belk has signed a lease to be at the Natchez mall for at least another eight years, he said.

Smith said there isn’t an exact timeline for the mall renovation to be complete because there are a lot of working pieces making it happen.

One aspect of the mall renovation is finding a new movie theatre tenant.

Cineworld, the parent company of Regal, announced in October 2020 that operations at 536 Regal theatres in the U.S. would cease, which included the Natchez Mall theater.

Since 2020, no movies have been shown there. A sign at the front of the property has said “temporarily closed” for two years, leaving many to wonder if there ever will be a Natchez movie theater again.

Cineworld Group, a U.K. based company, reportedly is planning to file a Chapter 11 bankruptcy petition in the United States and an insolvency proceeding in the U.K.

If all goes as planned, Smith said a modernized theater will reopen with “the right buyer.” Negotiations with multiple theater operators are underway, Smith said.

Old movie theater seats were stripped from the building and temporarily piled up outside at the back of the mall in recent weeks. This was part of the preparation for a new theater, he said.

“We’re preparing it for the right buyer to modernize,” he said. “Any theater company that would want to be there would want to have modern seating. We’re excited to be finalizing the sale of the movie theater. The movie industry has been significantly impacted by COVID-19, so it is taking time.”