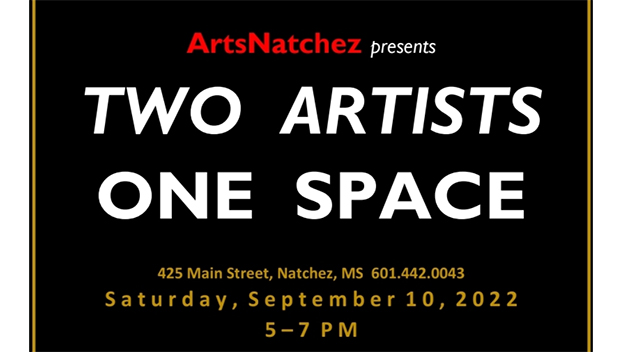 NATCHEZ — On Saturday, Sept. 10, ArtsNatchez will host a Featured Artists’ Reception for two of its members, Brad Bruce and David Hammett, called “Two Artists, One Space.” The reception runs from 5 to 7 p.m. at the gallery, 425 Main St., in the heart of downtown Natchez, and is free and open to the public.

Brad Bruce began his career at Marvel Comics, before moving on to an ad agency in Seattle and then a large publishing company in Chicago. Although he has traveled extensively around the country, he says there is no prettier place to live, work, and paint than in Mississippi.  His love of Mississippi landscapes and culture is reflected in his work, which can be found in collections throughout the country, from an office in the United Nations in New York City, to an actress’ home in Hollywood. His medium is mostly acrylic, but he also experiments with watercolor and oil.

David Hammett was born and raised in Louisiana. After serving in the U.S. Army, he returned to college to finish a BFA in painting, with a minor in ceramics. He worked for 35 years in the paint industry as a sales representative and store manager, retiring in 2011. After retirement, he took up painting and ceramics again and added woodwork to his artistic repertoire.  David follows his own aesthetic but is influenced by late 19th century Impressionism and early 20th century Modernism.

In addition to artwork, the reception will also feature live music and refreshments.  All guests to the event will be entered into a drawing for a Brad Bruce original painting, valued at $300.

For more information, please contact the ArtsNatchez Gallery at 601-442-0043.