‘The problem is so big’: Natchez residents ask aldermen to fund housing repairs in Minorville, among working poor 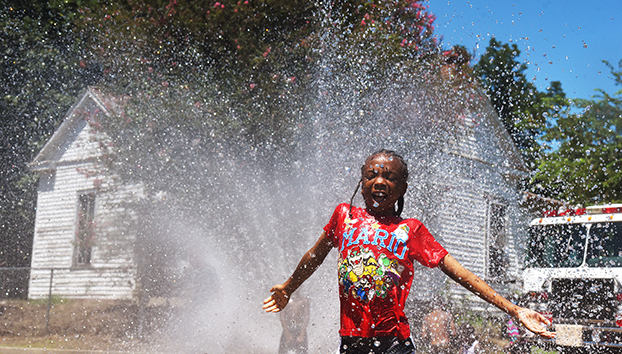 A youngster runs through a spray of water at the annual Minorville Jubilee in 2017. The Minorville community, centered around residents of Minor Street, are close knit and celebrate their neighborhood each year with a Jubilee. (Democrat file photo)

NATCHEZ — About 20 members of the community showed up to the City of Natchez special hearing on its budget Tuesday night seeking funding for efforts to improving housing conditions in Minorville and among the working poor.

Emarose Collins Jackson, who taught 36 years in the Natchez public schools, said the Minorville area is an important part of Natchez history.

“It hurts my heart to see the houses that many of my forefathers and ancestors spent money on — my daddy built my house from scratch, he and my granddaddy,” she said.

Many of those residents did not have children who inherited those houses. Instead, the houses went to heirs or became the property of absentee landlords, who have done no upkeep on the homes.

“Talking about Afro American history, Wharlest Jackson was born down there. There is so much of our history there. Mary Toles and many prominent African Americans lived there. Please do not forget us. We don’t want you to give us money. We don’t want to keep up with money, but we would love to see some of the changes and some of the things we are asking for,” Mrs. Jackson said.

Several years ago, a group of Minorville residents worked with the city’s community development department to write a grant application for funding for housing repairs on Minor Street, but that grant application was not submitted on time, she said.

Ben Tucker also spoke about the need for funds to help repair homes for those living in poverty in Minorville.

“When you don’t address poverty, you form what they call generational poverty. It’s nothing new. It’s nationwide and it’s here in Natchez. It needs to be addressed. The problem is so big it takes a lot of effort. It takes someone who really has a will to make a difference.

“Hopefully here in Natchez, with some changes that have come through different actions, that we have discussed already, we can take some of this money and try to make a difference. I’ll give you an example. A lady in my church said, ‘I want you to come over. I have some electrical problems.’ I am not electrician, but I went on over and we got to talking. Come to find out, she has a hole in her floor and a hole in her roof and her son had just passed from COVID. This is one example of where people are really living in conditions where they shouldn’t be living. This is the United States, the greatest nation in the history of the world, so why do we have poverty? We have had bank bailouts, which we should have had. I feel we can do better and we have to do a better job. I’m 70 years old and based on my experience, I think most people are generally good and care for other people. Let’s make this thing happen. We can do this,” Tucker said.

Tucker received a round of applause for his comments.

Georgia Collins Oliver, also a long-time educator in the Natchez public schools system, also discussed the issue of houses in the Minorville area.

“I agree with all of the comments. We are hoping you will be able to find some way to help us. You know the problem on Minor Street. It seems as though it is getting worse. We have done all we know to do. I don’t why we can’t get anything — and I’m not talking about color, I’m talking about Minor Street. I’ve thought maybe we just don’t have the contact, but I am hoping because we know you and know you are a fair person, mayor, I hope you will help us,” Mrs. Oliver said. “Thank you for listening to us.”

Jarita Frazier-King also spoke Tuesday night as a representative for the Natchez chapter of the NAACP. She asked that $50,000 be included in the city’s budget for fiscal year ending 2023 to assist with making repairs to homes and bringing homes up to par in the most blighted of the city’s neighborhoods.

Former Alderwoman Joyce Arceneaux-Mathis, who is president of the Natchez chapter of the NAACP, has held numerous meetings with county and city officials and community organizations, bringing awareness to the project which addresses needs for housing repairs among the working poor in Natchez. ALICE is an acronym meaning Asset Limited, Income Constrained, Employed residents.

The city operates the SNAP program, which makes available a limited amount of funds each year for home improvements among the lowest of income earners in the community.

The NAACP wants to address housing needs among those who make more money than the SNAP program allows, but who still can only provide basic needs such as food and health care and have no funds for home repairs like replacing a roof.

No budget decisions were made following the public hearing Tuesday night. The Mayor and Board of Aldermen intend to continue discussion on its proposed budget at its next meeting scheduled for 11 a.m. on Tuesday, Sept. 13.