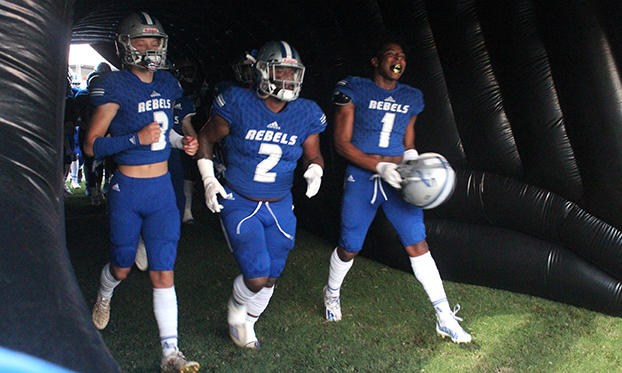 NATCHEZ — Not very often does Adams County Christian School’s varsity football team play host to a homecoming game this early in the season — even though it is Week 4 for the Rebels and most other teams in the Midsouth Association of Independent Schools.

However, it is Week 5 for their upcoming homecoming opponent this Friday night at Bobby Marks Stadium — a very good Centreville Academy Tigers team. Kickoff between the undefeated Class 4A Rebels at 3-0 on the season and the 3-1 and Class 3A Tigers is set for 7 p.m.

And it should be another classic duel between a pair of longtime and legendary head coaches in ACCS’s David King and Centreville Academy’s Bill Hurst. These two coaches have had plenty of memorable meetings going back to when King was head coach at the former Trinity Episcopal School for nearly 15 seasons before he went back to his alma mater at ACCS 10 years ago. Hurst has been leading the Tigers’ football program for approximately 50 seasons.

“Centreville is one of our friends. We’re very friendly with their coaches. Coach Hurst and I have known each other for a long time. We’ve been friends for a long time. We’ve had some memorable games,” King said. “We expect a tough, physical battle. We’re preparing for a war like we always get with Centreville. Every game is a must-win with the power points.”

Even though Monday was the Labor Day holiday, ACCS still went through its routine by having practice that day.

“We always practice (on Monday). We had a good spirited workout yesterday,” King said. “We had turnovers that cost us from putting (last week’s) game away. That’s what we focused on yesterday.”

With this also being homecoming week, King said he is somewhat concerned with the distractions that come with it, but not as concerned as he has been in the past. And with Centreville being ACCS’s homecoming opponent this year, the Rebels will not have to match the physicality the Tigers will bring, but they will have to stay focused for four quarters.

Both teams are coming victories in their district opener. ACCS went on the road and held off a late-game rally to defeat previously-undefeated Clinton Christian Academy 35-28 to go to 1-0 in what should be a competitive District 3-4A this season. The Rebels racked up 338 yards of total offense while its defense forced four turnovers, including two key interceptions by Jesse Grayson and a game-changing pick-6 by Sean Kerry Cothern in the second quarter.

Sophomore quarterback Coleman Carter threw for 223 yards and two touchdowns and ran for 64 yards on 10 carries, including the game-winning touchdown from six yards out with 3:33 remaining. Jordan Berry had five catches for 131 yards, including a 62-yard TD reception late in a back-and-forth first quarter that tied the game at 14-all.

While the Rebels took on a Warriors team that threw the ball more than they ran it last week, that will not be the case when they host the Tigers Friday night. They will have to slow down a Centreville team that thrives on running the ball and contain a Tigers team that will disrupt both the running and passing game with their aggressive style of play.