Dawgs trip to Arizona desert started more than a year ago 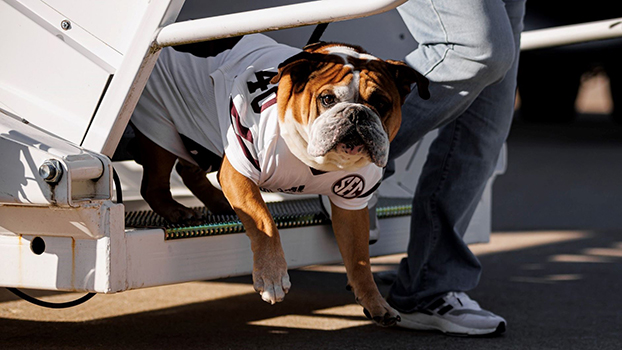 STARKVILLE – It’s no small feat to coordinate the transportation of close to 200 individuals no matter where they’re going. When a group of that size is traveling close to 1,500 miles, your ducks most certainly have to be in a row.

David Wilczewski stands as Mississippi State football’s chief duck liner-upper. More accurately, he’s MSU’s Associate Athletic Director of Football Operations. Wilczewski’s many responsibilities include ensuring the Bulldogs’ road trips go off without a hitch – even when those road trips head to places as far off as Tucson, Arizona, where MSU will play on Saturday night.

“My goal each week is I don’t want there to be very many differences between the home game last week against Memphis and what we’ll do this week when we travel to Arizona,” Wilczewski explained. “I want to take out as many questions, as many distractions or anything the players could have come up. I want to eliminate those things so everything is nearly exactly the same.”

It’s a job that’s easier said than done of course. But with a decade and a half of experience working in college football and now in his fourth year at Mississippi State, Wilczewski and the many that work with him behind the scenes are up for the task.

“We have one of the greatest [support staffs] I’ve ever been around,” Wilczewski said. “I would put our support staff that we have currently in place up against anybody in the country because we are operating very, very efficiently. I’m really happy about that, and I wouldn’t be able to do it on my own.”

It’s a group effort for sure and every piece of the puzzle is critical, particularly for games like the upcoming one as State heads out for its longest road trip in six years.

So just what all has gone into getting the Dawgs to the desert? Interestingly enough, it’s a process that actually began well over a year ago.

“This started back [around] March-April-May of 2021,” Wilczewski said. “In the SEC, I’ve been to almost every location. There are still a few I haven’t been to in my four seasons here. But with Arizona, I’ve never been there. So, I relied on my colleagues from other universities [for helpful information]. Jeff Rudy from Utah was somebody I reached out to because he’s in the Pac-12. Jeff has been [to Arizona] several times. He helped me out by recommending a couple of different hotels to look at and a couple of different bus companies to talk to. It’s the same thing with Joe Wood at USC. He was a good resource for this trip. They are people who do go on this trip every other year, so I wanted to rely on their expertise.”

Wilczewski then leaned on his own eyeballs and knowledge. Football is known for scouting, right? Well, it’s not just players and teams that get scouted.

“In May of 2021, I took a trip out to Tucson,” Wilczewski said. “I looked at three different properties for us to possibly stay at and settled at the one that I thought would fit us the best based on the way we do things – Coach Leach’s preferences, the meeting space and putting all that together for what would make the best trip for us.”

Again, what Wilczewski and the State staff value most anywhere they go is consistency. Sure, the scenery might change, but the goal is to keep the operations the same week to week.

“In some cases, what it ends up being is just a different venue,” Wilczewski said. “The meeting space may look a little different, but it’s going to be set up in the same way it is at each and every hotel we stay at.”

Outside of lodging, there are obviously still many other things to consider. Namely, the Bulldogs must get their stuff, and themselves, to Arizona.

That whole process has already begun. It began on Tuesday, five whole days before kickoff.

“Tuesday, [bus driver] Everett Kennard…[left] here and traveled 1,486 miles,” Wilczewski said. “Everett [brought] the bus [Tuesday] before practice. Over the course of practice [Tuesday] anything that’s going to the hotel that we don’t need for the rest of the week was loaded up on there. So, members of our support staff – [director of sports nutrition] Pamela Bartz, [head athletic trainer] Thomas Callans, [director of football equipment] David Case, [director of football technology] Chris Zuccaro – they all started loading things that need to go to the hotel. So, projectors, snacks, training room equipment – different things like that – those got loaded on Everett’s bus. [Wednesday] at the conclusion of practice, our 18-wheeler [full of equipment] will leave. So, we have a lot of Hail State branding that’s going to be traveling those 1,400 or 1,500 miles to Tucson.”

By late in the week, the focus shifts to travel. Assistant director of football operations Juliana Prezelski will get to Tucson on Thursday to ensure arrangements at the team hotel are ready for the Bulldogs’ arrival.

Now here’s where the Arizona trip is really different from other road treks. For most trips, Kennard’s bus doesn’t head out until either late Thursday or early Friday depending on the length of the journey, and the bus typically has a group of trainers, equipment managers and others onboard.

This time, those that’d usually be with Kennard will instead have a 30-seat chartered flight of their own. That plane will head out on Friday morning ahead of the MSU team plane that’ll leave later in the day. The managers, trainers and the rest will then immediately get to work on the ground in Tucson.

“They’ll land, and we’ll have a bus pick them up,” Wilczewski said. “They’ll do a quick drop at the hotel with the video staff so they can start getting meeting rooms set up. Two of the athletic trainers on that plane will stay back [at the hotel] and set up the training room. Everybody else will get right back on that bus, go over to the stadium and start setting up there. They’ll get the locker room ready. They’ll get the training room ready. Just so everything is in place when we arrive on Saturday evening for the game.”

Come 10 p.m. Mississippi time on Saturday night, the Bulldogs and Wildcats will kick off for the world to watch. No matter what the scoreboard ends up showing, the trip itself can be counted as a success for Wilczewski, the State support staff and all who work under the hood of the Mississippi State machine.