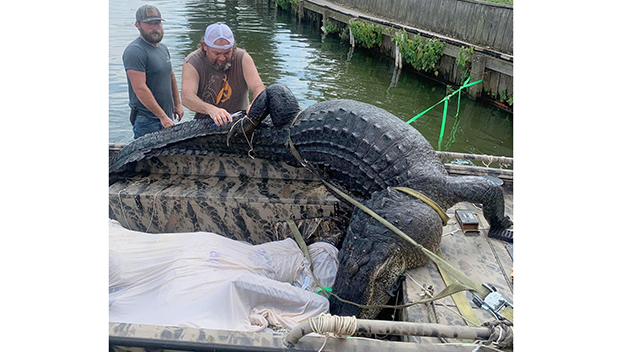 SPOKANE, La — Nathan Gauthier saw a surprise while working on Lake St. John Wednesday morning. Two men out of the Monroe area pulled up to the boat ramp with an 11 foot and six inches long alligator that weighed 800 to 1,000 pounds. They killed it on Lake St. John in Concordia Parish.

The gator was ratchet strapped to the side of their camo Havoc boat because they couldn’t get it over the sides and into the boat’s bottom, he said. Gauthier owns Nathan’s Marine and services boats, he happened to be at the landing and took some pictures of it.

“He was so big. I helped get him in their truck, and you could feel the weight,” he said. “You see it on TV, but being there and trying to do it were two different things. They were so glad to see me. They were down here for the week and had some other smaller gators in the boat. IT was just so big it was huge.”

He said they took the alligator to Marksville, Louisiana for processing. While he was not involved with the harvest of the gator, he said the guys told him it took five shots to kill it.

Gauthier said he was glad to help the men with the gator. They were staying at Spokane Resort on Lake St. John in Concordia Parish.

The Louisiana Department of Wildlife and Fisheries does not keep state records for harvested alligators, but they have length data for yearly harvest going as far back as 1972. LDWF’s records are mostly from skin lengths of hides measured before they are shipped out of state. It is not uncommon for gators to be 12 feet long.

“Over the past 50 years several 13 and 14 foot animals have been harvested,” Jeb Lincsombe Alligator Program Manager said. “Currently, there has never been a 15ft alligator documented in Louisiana.”