Natchez business owner looking for thief who reportedly took rolled-up large rug outside store, put it in their car and drove off 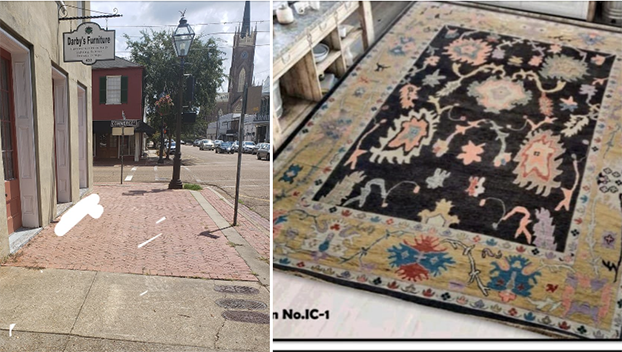 A downtown Natchez business owner is asking for the public’s help in finding the person who is responsible taking a rolled-up large rug and then putting it in their car without paying for it.

Darby Short, of Darby’s and Darby’s Furniture in downtown Natchez, posted about the rug theft on Facebook Thursday afternoon.

“STOLEN RUG !!! WE HAD A 9 X 12 ROLLED UP JUST OUTSIDE THE BUILDING AND SOMEONE STOPPED AND PUT IT IN THEIR CAR !!!” the post said.

Short said one of her customers who witnessed the theft described the alleged rug thief as a female in her late 20s to early 30s with shoulder length, light  brunette hair. The witness said the thief put the rug in a 4-door, late model car.

Short posted pictures of the rug that was stolen.