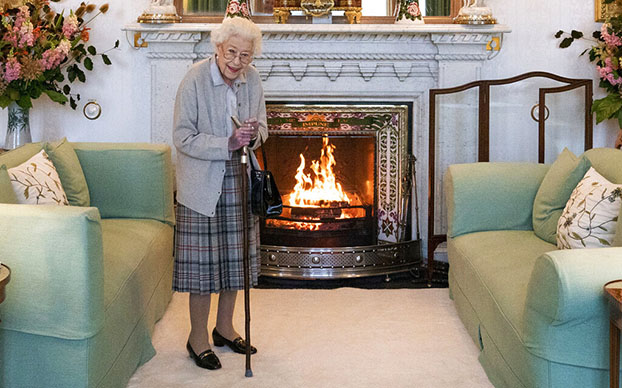 FILE - Britain's Queen Elizabeth II waits in the Drawing Room before receiving Liz Truss for an audience at Balmoral, in Scotland, Tuesday, Sept. 6, 2022, where Truss was invited to become Prime Minister and form a new government. Buckingham Palace says Queen Elizabeth II is under medical supervision as doctors are “concerned for Her Majesty’s health.” The announcement comes a day after the 96-year-old monarch canceled a meeting of her Privy Council and was told to rest.(Jane Barlow/Pool Photo via AP, File)

Queen Elizabeth II, Britain’s longest-reigning monarch and a symbol of stability across much of a turbulent century, died Thursday. She was 96.

Buckingham Palace said she died at Balmoral Castle, her summer residence in Scotland, where members of the royal family had rushed to be by her side. The BBC played the national anthem over a portrait of the queen in full regalia.

With the death of the queen, her 73-year-old son Charles automatically becomes monarch, even though the coronation might not take place for months. It is not known whether he will choose to call himself King Charles III or some other name.

The queen enjoyed robust health well into her 90s, although she was seen using a cane in one appearance after the death of Philip, her husband of 73 years, in April 2021. In October of that year, she was hospitalized for a night in London for tests, and thereafter her public appearances grew scarcer.

In 1947, almost five years before she ascended the throne, the 21-year-old Elizabeth promised the people of Britain and the Commonwealth that “my whole life, whether it be long or short, shall be devoted to your service.”

It was a promise she kept across more than seven decades.

The only monarch most Britons have ever known, Elizabeth reigned for 70 years over a country that rebuilt from war and lost its empire; joined the European Union and then left it; transformed from industrial powerhouse to uncertain 21st century society. She endured through 15 prime ministers, from Winston Churchill to Liz Truss, becoming an institution and an icon — a fixed point and a reassuring presence even for those who ignored or loathed the monarchy.

Elizabeth Alexandra Mary Windsor was born in London on April 21, 1926, the first child of the Duke and Duchess of York. She was not born to be queen — her father’s elder brother, Prince Edward, was destined to take the crown, to be followed by any children he had.

But in 1936, when she was 10, Edward VIII abdicated to marry twice-divorced American Wallis Simpson, and Elizabeth’s father became King George VI.

Princess Margaret recalled asking her sister whether this meant that Elizabeth would one day be queen. “’Yes, I suppose it does,’” Margaret quoted Elizabeth as saying. “She didn’t mention it again.”

Elizabeth was barely in her teens when Britain went to war with Germany in 1939. Elizabeth and Margaret spent most of it at Windsor Castle, spending many nights in an underground shelter as bombs fell.

In 1945, eager to do something for the war effort, the heir to the throne joined the Auxiliary Territorial Service, where she enthusiastically learned how to drive and service heavy vehicles.

On the night the war ended in Europe, May 8, 1945, she and Margaret mingled, unrecognized, with celebrating crowds in London. She later described it as “one of the most memorable nights of my life.”

At Westminster Abbey in November 1947 she married Royal Navy officer Philip Mountbatten, a prince of Greece and Denmark whom she had first met in 1939 when she was 13 and he 18.

In February 1952, George VI died in his sleep after years of ill health at age 56. Elizabeth, visiting Kenya, was told that she was now queen.

“In a way I didn’t have an apprenticeship,” Elizabeth reflected in a BBC documentary in 1992. “My father died much too young, and so it was all a very sudden kind of taking on, and making the best job you can.”

Her coronation took place more than a year later at Westminster Abbey, a spectacle viewed by millions through the still-new medium of television.

Prime Minister Winston Churchill’s first reaction to the king’s death was that the new queen was “only a child,” but he was won over within days and eventually became an ardent admirer.

Churchill was the first of 15 prime ministers in her reign. The monarch held weekly meetings with them, and they generally found her well-informed, inquisitive and up to date.

Her views in those private meetings became a subject of intense speculation and fertile ground for dramatists like Peter Morgan, author of the play “The Audience” and hit TV series “The Crown.” Those semi-fictionalized accounts were the product of an era of declining deference and rising celebrity, when the royal family’s troubles became public property.

There were plenty of troubles. In Elizabeth’s first years on the throne, Princess Margaret provoked a national controversy through her romance with a divorced man.

In what the queen called the “annus horribilis” of 1992, her daughter Princess Anne was divorced, Prince Charles and Princess Diana separated, and so did Prince Andrew and his wife, Sarah. That was also the year Windsor Castle was seriously damaged by fire.

The public split of Charles and Diana was followed by the shock of her death in a Paris car crash in 1997. For once, the queen appeared out of step amid unprecedented public mourning, failing to make a public show of grief that was seen by many as unfeeling. After several days, she made a televised address to the nation.

The dent in her popularity was brief. She was by now a sort of national grandmother, with a stern gaze and a kind smile.

She was arguably the most famous person in the world. But her inner life and opinions remained mostly an enigma. The public saw only glimpses of her personality — her joy watching horse races at Royal Ascot, or her pleasure in the companionship of her beloved Welsh Corgi dogs.

In 2015, she overtook her great-great-grandmother Queen Victoria’s reign of 63 years, seven months and two days to become the longest serving monarch in British history, and she kept working into her 10th decade. The loss of Philip at age 99 in 2021 was a heavy blow.

And the family troubles kept coming. Her son, Prince Andrew, was entangled in the sordid tale of sex offender Jeffrey Epstein, an American businessman who had been a friend. The queen’s grandson Prince Harry walked away from Britain and royal duties after marrying American actress Meghan Markle in 2018.

As the queen entered her mid-90s, she had what the palace called “mobility issues” and she appeared infrequently in public in 2022, the year of her Platinum Jubilee. In May, she asked Charles to stand in for her at the State Opening of Parliament, one of the monarch’s key constitutional duties.

But she remained firmly in control of the monarchy as Britain celebrated her Platinum Jubilee with days of parties and pageants in June 2022. On Sept. 6, 2022, she presided at a ceremony at Balmoral Castle to accept the resignation of Boris Johnson as prime minister and appoint Liz Truss as his successor.

She remained at the center of public life to the end, not least during the coronavirus pandemic. As Britons endured loss, isolation and uncertainty, she made a rare video address in April 2020 that urged people to stick together.

She summoned the spirit of World War II, that vital time in her life, and the nation’s, and echoed Vera Lynn’s wartime anthem, “We’ll Meet Again.”