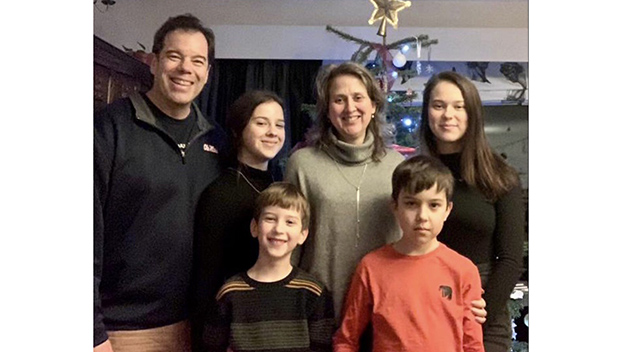 From left, Duke Eidt with his family, daughter Ann Morgan (18), wife Kate, daughter Maddie (20), son Thomas (9), and son Joseph (11) are pictured at their home in England on Christmas in 2020. (Submitted photo)

United States presidents, past and present, expressed their condolences to the royal family as the 96-year-old monarch died, ending her 70-year reign.

And in England, at least one former Miss-Lou resident shared in that mourning.

Duke Eidt, a native of Natchez, has lived and taught high school history in England for the past 19 years.

“We watched the BBC broadcast of the crowds gather both at Buckingham Palace and Trafalgar Square — very solemn indeed,” he said Thursday afternoon.

As an American installed in the UK, Eidt said opinions of the crown among the locals are as diverse as what Americans think of their political leaders, but with “a common respect, even if they love to gossip about the family as much as anyone else.”

“There is a deep sense of tradition here and I have no doubt everyone from the bus drivers to the local landed families will turn out to pay their respects,” Eidt said.

As for his family, Eidt said his own children, after hearing the news of the queen’s death, wondered if they would have school the next day. They would.

However, he received an email that said local schools would have an assembly to commemorate and there would be a bank holiday on the date of her funeral.

Eidt said he was never able to see Queen Elizabeth II. He and his family live in Cambridgeshire, about an hour and a half north of London. After his arrival in England, Eidt recalls watching the Trooping the Colour ceremony, the Queen’s birthday parade, but “never saw her as the crowds are ‘mad’ as the Brits would say and only around 8,000 tickets are offered.”

“I will say that I’ve grown to have more admiration for the crown and the Queen the more I’ve lived here,” he said. “Her commitment to serving the British people is unwavering and the charitable work done through the royal family is remarkable.”

The BBC played the national anthem, “God Save the Queen,” over a portrait of her in full regalia as her death was announced, and the flag over Buckingham Palace was lowered to half-staff as the second Elizabethan age came to a close.

In a statement, Charles called the death of his mother “a moment of the greatest sadness for me and all members of my family,” adding: “I know her loss will be deeply felt throughout the country, the Realms and the Commonwealth, and by countless people around the world.”