‘Best backup punter in the state’, Lewis steps up for Green Wave 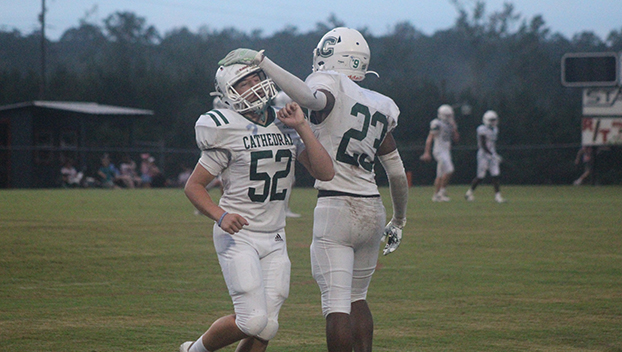 Kaden Batieste congratulates Jack Lewis on a 70-yard punt in the first quarter. Lewis plays on the line and is a punter for Cathedral. (Hunter Cloud | The Natchez Democrat)

Penalties, missed tackles and missed blocks hindered the Green Wave on a muddy field in Pike County. After the game, head coach Chuck Darbonne asked the seniors if they had anything to say.

Jake Maples raised his hand and gave praise to Jack Lewis, a defensive end, center and backup punter for the Green Wave. Lewis had two punts for 50 yards and one punt for 70 in the game.

Lewis said he found out he would be punting right before the game kicked off.

“I expected to do alright. I hadn’t really practiced a whole lot,” he said. “Our punter was sick and I could catch it and kick it a little bit, so they chose me.”

Lewis’ first punt was nearly blocked by Parklane. Darbonne said the other punts received great protection from the team.

Lewis said when he is punting cowbells, screaming fans and band all fade into the background. He focuses on his job of putting his laces through the ball.

“I just tune everything else out, I catch it and punt it,” he said. “On the first punt, I caught it and turned and saw him coming. I got it off as fast as I could.”

Playing both ways could make a player exhausted, but not Lewis. When he was subbed out for a play, he grabbed a shot of water and was ready to go back in.

“This is the best backup punter in the state,” Graning said.

Not only is Lewis the backup punter, he is a leader on defense. A senior, he demonstrates the quality the coaches are expecting.

“He is going to get whatever is in front of him every time. It is why he is rotated so much,” Graning said. “He is still learning. He started as a linebacker. He has quickly learned and does his best. He will give his 100 percent effort. Lewis is a senior leader we can count on. The whole senior class is. It’s time to turn it around.”

One of the senior leaders is out with a knee injury for a couple more weeks. Mason Moore, a possession receiver, hurt his LCL and had a deep bone bruise in a jamboree before the season.

He is often chatting on the sideline with the Rev. Aaron Williams during the game. Moore said they just talk about the game and whatever else comes to mind.

Sometimes the conversation turns to what is going good or bad in the game. Williams told the team he felt they lost the will to win on the first drive of the game. He could see it in their body language.

Moore said it was tough being on the sidelines unable to help. He should return to practice on the 19th and will play the next week.

“It’s hard being out and watching. I want to get back and help the team,” Moore said. “Whatever I can do to help, I want to do it. I just want to get out there and play and do what I can.”

Cathedral’s only touchdown of the game came on a 40-yard touchdown pass from Noah Russ to Kentrell Mackel.

The seniors will be asked to lead the Green Wave (1-2) as they travel to Pisgah on Friday. Kickoff is 7:30 p.m.