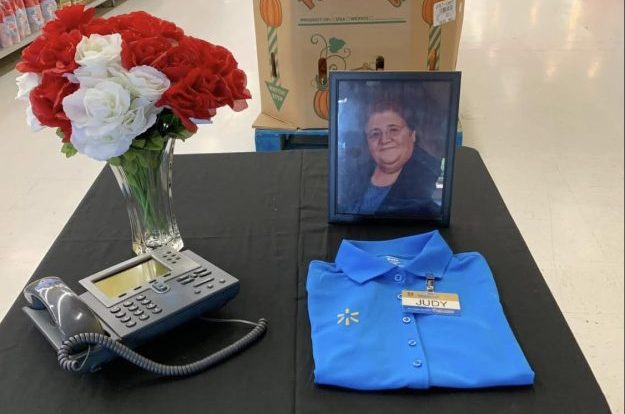 This image posted on social media this week shows the memorial display created for Judy Ann Adams, affectionately known as "the voice of Walmart" in Natchez

Friends and co-workers at the Natchez Walmart are mourning the death of a woman known as “the voice of Walmart.”

Judy Ann Adams, 77, died Sept. 1 in Cleveland, Texas. This week, co-workers created a memorial at the entrance of the store, with a phone; a photo of Adams; and her Walmart name tag.

Adams worked at the Natchez retailer for more than 35 years as a phone operator and dressing room attendant.

According to her obituary notice, “Her voice on the phone and over the intercom system was so distinct that many people would hear her speak in public, come up and say, ‘I know your voice form somewhere.’

“She would then proceed to tell them she worked at the fitting room at Walmart and they would say, ‘Oh, you are the voice of Walmart.'”