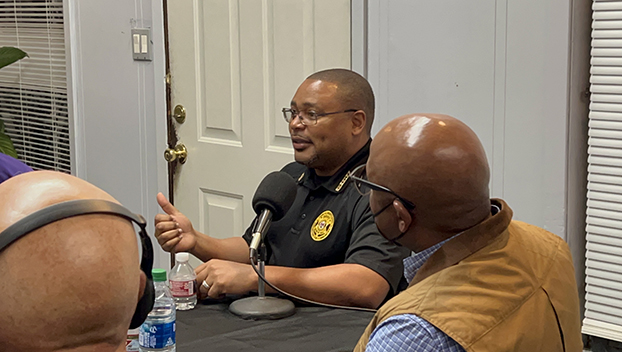 Adams County Sheriff Travis Patten released a statement on Friday in response to comments by county officials regarding pay raises in his department and their impact on the budget.

The text of that statement is as follows:

To the Citizens of Adams County, this is certainly not a letter that I had any intention of writing, but after statements were made in the article title “Employee raises break county budget”, I feel compelled to write a response in defense of all county employees. For the past two years, we have asked for a budget meeting and never received one until last month. Everyone living saw what Covid, soaring gas prices and inflation has done to the county and the country over the past 2 years. When Covid-19 first hit, no one had an answer on how to deal with risk of infection while trying to protect vulnerable employees and continue to provide services to the public. Along came the idea to send everyone home, with pay for months, who were at high risk of catching the disease. This in return, put a tremendous burden on the backs of everyone else left to carry the load. At one point ACSO was working 18 to 20 people short for a couple of months, while continuing to provide the level of service that we are known for in this community. This took a toll on our overtime budget because we had to make up for all the people who were advised and told not to come to work. State of Emergencies was declared and we were told that any time and money spent in connection with Covid would be reimbursed to our budget. We kept the total number for supplies and overtime spent during the Covid era and it ended up being over $369,000. This was money that had been allocated for other items to be purchased in this particular physical year that we never were able to get, due to Covid. Now this money was being spent strictly because of all the restrictions and precautions that came as a result of Covid. The government issued reimbursements for this full amount but it was never put back into our budget, it went directly to the general funds even though the county didn’t even budget for. Since the money went to general funds for this unexpected expense and not returned this is only one thing that crushed our budget.

The next thing that hit us were the gas hikes and inflation period. Keep in mind that we have requested budget meetings for the past two years and had not received one until a month ago. Prior to the past two years, it was customary to have budget meetings every year prior to budgets being approved and set. For the past two years, we have received notification of rate hikes for essential services being provided. This includes everything from supplies, uniforms, food, gas, internet, etc. We have been requesting an increase in budget in the amount of $700,000 to cover the rate increases and did not receive an increase. The two largest reasons for this request was because of increase in food cost and gas cost. Gas was budgeted at around $2.75 a gallon when the budget was submitted but rose almost to $5.00 a gallon within the same budget year. This would deplete anyone’s budget. We knew this going in and that is why we tried to get the rate increase approved up front. Our total budget is around 4.8 million but we knew up front we would need an increase due to notifications submitted but almost all our vendors upfront. Our budget was set without even having a discussion to take these new factors in consideration for the past two years. We were told that we would receive that same budget that we previously had. The statement was made that if we run out of money, just ask for more money. Knowing that this would cause us to be over budget at the end of the year, this was the new culture that was put in place. I replied by saying, I asking now because we have already been notified of the increases in rates for services provided by our limited amount of vendors. Since then going forward this has been the new practice. As of today. Our budget is actual $540,000 over because we did not receive the funds requested at the beginning of the budget year even after being notified upfront by vendors. I am sure everyone at their homes received rate hikes for services such as insurance, utilities, gas and food so I can’t understand why someone can’t see the same for a business.

Note that I don’t approve a budget nor do I approve rates of pay. With that being said, I am grateful for the current supervisors doing what is necessary to get us through the Covid era as they are currently battling inflation countywide, but I do take issue with the county administrator blaming pay raises for the counties financial woes. For the past two years, we have been overrun by vendors and creditors seeking payments for unpaid bills. At ACSO, we are responsible for submitting the invoice only, not making the payment. Even though budgets are supposed to be zeroed out at the end of each physical year, we are still making payments on items purchased out the previous budget from our current budget. Items that were ordered and issued a P.O. and not paid for last years but did not arrive until this year, comes out the current budget even though it was ordered and budgeted for the previous year. If it was paid for in that budget year, it wouldn’t cause issues in the current year.      Vehicle purchases have been an issue as of the past two years nor budgeted for by the county administrator. Paperwork and request have been submitted on time (several months in advance) but have been stalled until we are pass the point where they can be purchased at state contract price. Prior to the past two years, this was not an issue. Now, due to no fault of our own, we have yet to get a vehicle in the past two years at state contract pricing. We can only submit the request in time but I cannot approve my own request. This also plays a factor in being over budget because it was requested by ACSO originally, but not added until months later after the budget is already set, giving the impression that you are over budget. If this was added up front, this would not be an issue. The vehicle prices on state contract is a little over $31,000. When state contract deadlines are missed, the price is a little over $43,000. Both prices are minus the equipment upfit. This has happened two years in a row. Again, I want to thank the board for declaring an emergency and purchasing the vehicles. Otherwise, we would have deputies without a vehicle to respond in. Prior to pass two years, we use to partner with Win Job Center’s OTJ Program. This program would pay up to 640 hours of a new recruit’s salary if they had no experience in the field they were hired to work in. Reimbursement for a jailer’s salary would be up to $8,467.20 and for a deputy it would be up to $10,771.20.  This program is now under Co-lin and requires a renewal process that has to be done by the county administrator, not ACSO. I have requested and been pushing to get this invaluable program reinstated and two years later, it still isn’t done. It’s hard to hear someone take about a saving money when you will not go after money that is already and available on the table.

Just last week, our Fuelman was cut off because their bill was pass due and this is not the first time that this has happened. We can submit invoice to be paid, but we cannot approve them ourselves to be paid. I am so grateful to Kaiser’s Petroleum for stepping up and allowing us to get us to use credit. If it wasn’t for the board approving this purchase and Kaiser’s allowing fuel to be purchased on credit, we would have had to take calls from the house that weekend. With help from the board, this crisis was averted. There has to be a better system put in place and it starts with communicating prior to making statements in the paper that do not tell the full story. Right now, the only way and inmate can receive special medical services that are sometimes required outside of the emergency room, is for full payment to be made up front. These were all new issues that we didn’t have to attend with two years ago. Being required to be paid upfront is becoming more of a requirement by vendors who choose to do business with us because of overdue accounts.

The last thing I want to say is this in regards to raises. Supervisor Gray always says that we need to pay our county employees a living wage and I commend him and the entire board for trying to do just that. Then you turn around and see a statement made like the one that prompted me to write this article. The fact of the matter is that raises alone didn’t cause the county to go broke and the statements made against the agencies claimed to have cause this are certainly inaccurate. I am sure that if you took a deeper dive, you will find that it wasn’t just the well-deserved raises that causes this issue. Truth be told, ACSO goes above and beyond their job task to serve this community and deserve every single dime they get. So do all the other first responders and county workers that give their all to serve this community every day. Then ask yourself, what services that we provide by any first responders and county workers that you want to see cut out. Under past administrations, ACSO use to be one of the highest paid in the state for and agency our size. Now, even after the raise that is being complained about, our patrol deputies starting salary is less that Gloster Police Department, who starts out at $18.00 an hour. The starting salary at the prison on highway 84 is now $18.50 an hour?  Yet, even with the raises, our jailers are on par with Wendy’s minus the benefits. I cannot remain silent when statements are being made about people who receive so little pay for the hard work they do. Department and Agency heads fight daily trying to keep under paid staff happy for retention reason and to ensure services are still provided. It’s hard to do that when statements like this are made. Statements like these have a tendency to create hostile work environments. Suddenly other jobs start to look a lot better to an employee tittering on the edge of leaving, when they feel unappreciated. The cost of living has went up for everyone and pay should go up as well. As of Oct 1st, if raises aren’t given, we will not only be one of the lowest paid in the state for an agency our size, but we will also be the lowest paid in this Adams County. Yet, the desire for ACSO’s services will continue to increase and we will continue to respond. At the end of the day, the raises given to all county workers was less than one percent of the county’s total 34 million dollar budget. With the things that I see the county workers and first responders endure day in and day out, I feel like that are worth that and more.