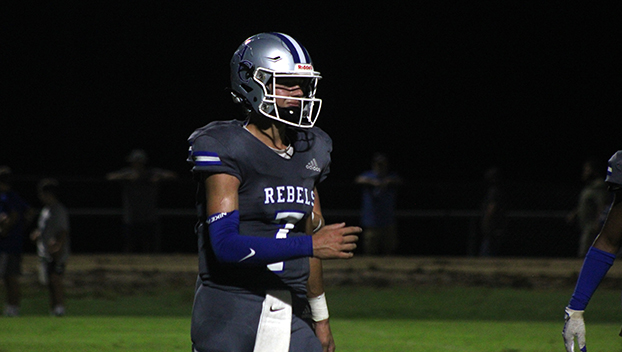 It was ACCS’s homecoming game at Bobby Marks Stadium, but Mother Nature almost put a damper on the occasion. Most of the homecoming festivities took place in the Rebels’ gymnasium before kickoff, but the crowning of a homecoming queen did indeed take place at the half.

As for the game itself, it appeared like it was going to be a good game as Centreville tried its best to rally from an early 14-0 deficit. That happened thanks to Carter’s 24-yard TD pass to Jesse Grayson with 9:42 left in the first quarter and his six-yard TD pass to Samuel Merriett at the 5:46 mark of the opening quarter.

John Austin Sterling reeled in a 39-yard touchdown pass from freshman quarterback Parker Nettles, but the try for two failed with 10:51 left in the second quarter. Jordan Berry returned the ensuing kickoff 80 yards for a touchdown and Merriett’s PAT gave the Rebels a 21-6 lead just 15 second later.

Grayson had two catches for 31 yards and Berry had two receptions for 36 yards.

Then Tyler Wooley ran in from six yards out, but again the two-point conversion was no good and the Tigers trailed 21-12 with 9:45 remaining before halftime. After that, the Rebels took over and seized control of the game.

Carter had touchdown runs of one and 10 yards, Tristan Burns ended a potential scoring drive by the Tigers when he picked off a pass by Nettles and returned it 62 yards for a pick-6, and Berry scored on an eight-yard run to give ACCS a 47-12 halftime lead.

Carter completed seven of 12 passes for 124 yards while rushing five times for 58 yards. Connor Aplin had three carries for 40 yards while Adrian Walker had one carry for 36 yards to go with one catch for 42 yards.

Which meant the rest of the game would have a running clock and both teams went to their junior varsity players. Centreville scored nearly midway through the fourth quarter on a nine-yard run by Liam Schwartz and eighth-grader Kayde Redmond threw a two-point conversion pass to his brother, freshman Preston Redmond.

Defensively, Alex Pollard had a team-high five tackles for the Rebels. Dantavios Stampley had four tackles and one sack. Berry had three tackles to go with his pick-6 and Caden Aplin had four tackles.

ACCS (4-0, 1-0) travels to Vicksburg to take on St. Aloysius High School in an MAIS District 3-4A game next Friday at 7 p.m. Centreville Academy (3-2) plays host to Silliman Institute at 7 p.m. next Friday.