‘The Voice of Walmart,’ Late employee of 35 years honored with memorial balloon release 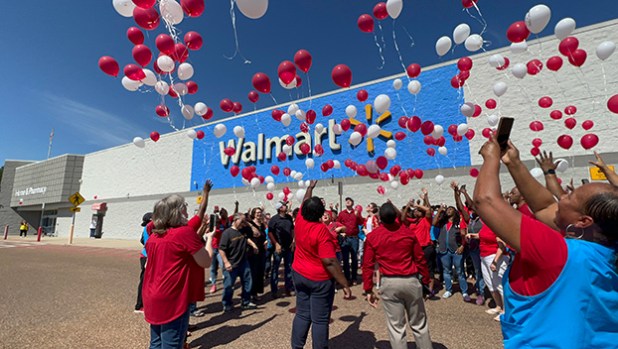 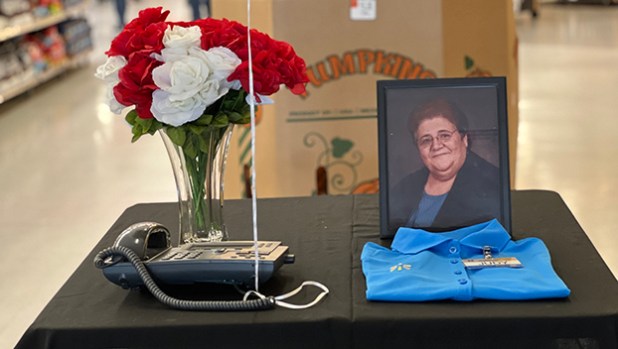 Co-workers created a memorial at the entrance of the store with a phone, a photo of Adams and her Walmart name tag and vest laying on a table next to a vase of red and white roses. (Sabrina Robertson | The Natchez Democrat) 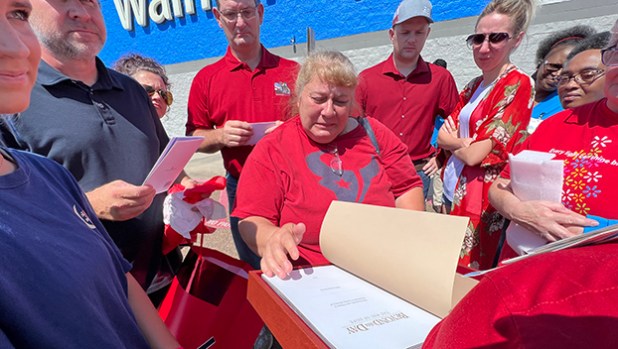 NATCHEZ — Dozens of Natchez Walmart employees replaced their traditional blue and yellow vests with bright red T-shirts on Friday and carried red and white balloons with them to the parking lot of the store.

Red was the favorite color of Judy Ann Adams, who worked there for more than 35 years before she died on Sept. 1. She was 77 years old.

Adams used hers to love and show kindness to everyone until she died of a massive heart attack while visiting her daughter in Cleveland, Texas, said her longtime friend and coworker, Stella Lambert.

Adams and her biological family were honored by her work family on Friday with a memorial balloon release and small reception in the Walmart employee lounge.

“She would have loved this,” said Adams’ daughter, Wendy Adams Kilpatrick, while holding back tears.

Adams went by different titles, including “Granny” and “Voice of Walmart.” She earned the “Voice of Walmart” title working as a phone operator and dressing room attendant, Lambert said. Whenever someone called the store, she would answer the phone with her distinct voice, so distinct that people started to recognize her voice even if she wasn’t working.

“You could go with her anywhere and someone would ask her, ‘Do you work at Walmart? I know that voice,’” Lambert said.

Co-workers also created a memorial at the entrance of the store with a phone, a photo of Adams and her Walmart name tag and vest laying on a table next to a vase of red and white roses. Lambert said she wasn’t related to Adams but Adams’ family welcomed her with open arms. Adams did the same for anyone she met and had a way of making everyone feel like family, she said.