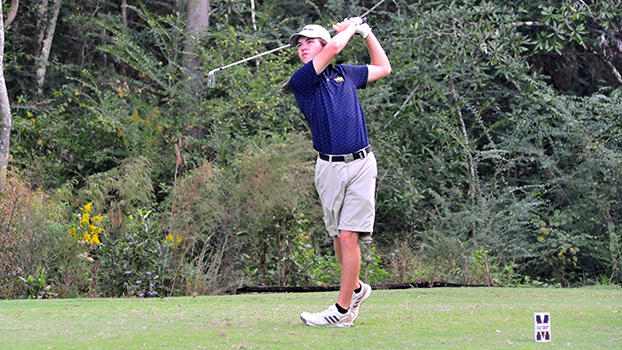 PERKINSTON — Mississippi Gulf Coast returns just two players from last year’s NJCAA Division II Men’s Golf runner-up team. But those are good players, and they’re joined by a passel of freshman who coach Brad Thornton thinks will add up to another good team.

“With a lot more freshmen than what we’re used to, you’re gonna be inexperienced, but I think it’s a very talented group,” he said. “We are shaping up well to start the year. This guys have surprised me coming out of the gate. We’re expecting another good run during the regular season and hopefully some postseason championships.”

The Bulldogs start competition on Monday with the first MACCC event of the year. They will be in Corinth for the two-day event at Shiloh Ridge Golf Club. It’s the first of six conference regular-season events, and the Bulldogs are playing in four other 54-hole events from Daphne, Ala., to Allendale, Mich.

Gulf Coast, which finished second at the NJCAA Championship in the spring, is ranked seventh in the country in the first Bushnell Golfweek NJCAA Division II Coaches Poll of the fall.

That doesn’t seem to faze Thornton at all.

“Not one bit,” he said. “This team is gonna be one of the top contenders in the country just from the way they carry themselves and act every day, in the classroom, at practice or qualifying. They definitely have what I would call an It Factor. We may take some lumps along the way, but we’ll be ready.”

Alessio Graziani (So., Johannesburg, South Africa/Beaulieu College) and Chase Kaiser (So., Natchez/Cathedral) were part of the team that won the Bulldogs’ 13th district/region championship in the last 14 tries. They then went to Joplin, Mo., and staged a huge comeback after a poor opening round to finish second at the national championship. Graziani and Kaiser also each won tournaments on their own.

“It’s a small sophomore class, but they both have a lot of experience from last year,” Thornton said. “They know where we faltered last year and what we need to be more accountable for. They’ve done a great job of that, but the best experience they had was winning.”

Kemit Spears (So., Gulfport/Homeschool) has transferred in from Cedarville University in Ohio, and he’s putting pressure on the team in qualifying.

The freshman class is a group that’s made for exciting qualifying among the squad to make the five-man team that will participate in Corinth.

Will Burnham (Fr., Jackson/Jackson Prep), the Mississippi Golf Association Junior Player of the Year in 2020, has high school state championship pedigree, as does Jackson Wise (Fr., Pontotoc/North Pontotoc). Thornton said Andrew Zielinski (Fr., Ocean Springs/Ocean Springs) is one of the steadiest golfers he’s seen at Gulf Coast, relaxed and able to get down to business.

Mateo Jimenez (Fr., Diamondhead/Hancock) and Raines Walker (Fr., Madison/Saint Joseph) both have a lot of experience on the junior circuit.

Graziani’s friend from back home joins him at Perk. Kyle Davidson (Fr., Kyalami, South Africa/St. Peter’s College) is going to make an impact this season. And you can bring your popcorn to the tee box.

“He puts on a show off the tee,” Thornton said. “He’s one of the longest hitters we’ve ever had here at Gulf Coast. He’s still getting acclimated, but when he gets to that comfort level, he’s going to play a huge role for us this year.”

Gulf Coast’s depth will be important against an expanded field of MACCC opponents. There are now 11 schools with golf teams, and Meridian, Northeast and Copiah-Lincoln are among the main challengers. Pearl River, East Central, Southwest Mississippi, East Mississippi, Jones, Hinds and Itawamba round out the list.