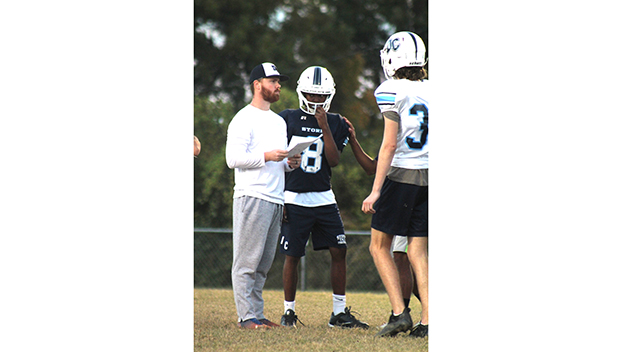 “It was alright. It rained a little bit, but it wasn’t too bad,” Wheeler said.

Wheeler said that while the defense played good for four quarters, the offense will need to do a better job of holding on to the football.

“Offense moved the ball well, but we had some turnovers. Played good defense all night,” Wheeler said.

“Defensively, it was just a team effort. (Senior defensive lineman) Clay Roberson had a good night,” Wheeler said. “They tried to run the ball on us. They’re a flex-bone kind of team. We did good staying disciplined.”

Delta Charter (2-0) will travel to Monroe, La. to take on Glenbrook School with kickoff this Friday at 7 p.m.

Glenbrook improved to 2-0 after an impressive 42-14 victory on the road over Bossier High School. Wheeler said the Apaches are a good team and the Storm should not take them lightly.

“They’re undefeated. They’ve been playing really good defense. They send a lot of pressure. They tackle well,” Wheeler said. “Offense moves the ball. They give you a lot of different looks. We’ll have to stay just as disciplined on defense this Friday night as we were last week.”

Wheeler said for Delta Charter to defeat Glenbrook on the road, the Storm will have to cut down on the turnovers and have fewer penalties.

“We just need to execute better, that’s all,” Wheeler said.