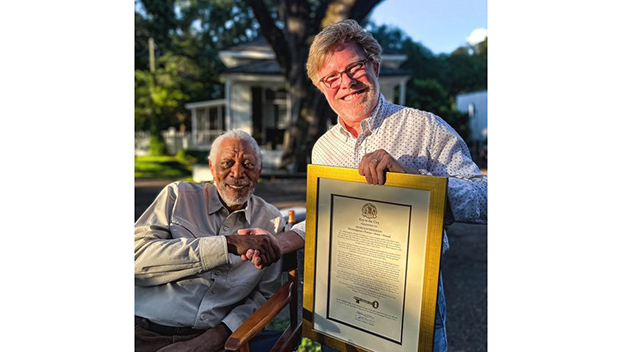 NATCHEZ — Natchez Mayor Dan Gibson said he will never forget the experience he had as he presented actor Morgan Freeman with a Key to the City on Saturday.

Natchez, the Hollywood of the South, for months now has been a filming destination for a new History Channel documentary, “Great Escapes with Morgan Freeman,” starring Morgan Freeman. Season 1, with eight episodes, has already been released and filming of Season 2 has just wrapped, according to Gibson.

While much of Morgan Freeman’s narration has been done in a studio, rumors of the iconic voice actor’s presence in Natchez have flitted about the city.

Those rumors have been confirmed.

Natchez Film Company shared a photo of the mayor and Freeman together as Gibson presented Freeman with the Key to the City.

Gibson said the presentation was put together “last-minute” by himself and the production company. Gibson said he wanted to write the language on the certificate to be presented with the key to Freeman personally. He worked on it Friday and the framing company finished it in record time, he said. He then received a phone call Saturday evening to set up the encounter within minutes of it taking place.

Gibson said Freeman would “visit with anyone who comes his way,” however, Saturday’s presentation was very private because he was on the job.

“I was wearing shorts with flip-flops,” he said. “I did manage to tuck my shirt tail in.”

Gibson said he apologized to Freeman and said he would’ve formally dressed up.

“He laughed,” Gibson said of Freeman. “His charm and love for people were far more than I’ve ever imagined. I’ll never forget it.”

The tradition of presenting a Key to the City can be traced back to medieval times when the entrance to a city required permission to enter through locked gates.

Now the tradition is an honorary gesture presented to distinguished persons and honorary guests of cities.

“Absolutely,” Gibson said. “I’ve been a fan of Morgan Freeman all my life. I can’t even begin to count the movies I’ve watched that he starred in. Among his films are my favorite movies.”

Not only that, but Gibson recalled visiting the Palaces of St. Petersburg exhibit in Jackson and hearing Freeman’s voice narrate the experience.

“His voice has become a household voice to so many across our world,” Gibson said. “Most exciting was just to have a wonderful conversation with a wonderful man. His warmth, his love for Mississippi and his love for Natchez made the visit one I will never forget.”

Gibson thanked Freeman and his production company for choosing to film in Natchez and also Tate Taylor and John Norris of Crooked Letter Pictures for encouraging him to come here.

“It means jobs and business for hotels, restaurants and other vendors,” Gibson said. “It would not be happening were it not for Tate Taylor and John Norris. They’re the ones who have brought all of these productions here.”

In the series, Freeman explores real-life prison breaks that have captured the attention of the public. Famous escapes from Alcatraz, Dannemora, Pittsburgh State Penitentiary and other locations are recreated with actors playing key roles and interviews with some of the prisoners themselves, their families, their cell mates and the guards and prison employees that tried to prevent the escapes.

The show is also hiring locals as cast members and extras. Casting notices are posted in a few spots, including the Morgan Casting Facebook Page, MyCastingFile.com and actorsaccess.com. Casting inquiries may also be emailed to castinggreatescapes@gmail.com. Extras receive $100 per day for up to a 12-hour day of work prominent roles, named characters, can be paid between $150 to $200 per day for roles that may require filming over a span of multiple days.

Below is the text that was presented to Morgan Freeman with the Key to the City by Natchez Mayor Dan Gibson on Saturday, Sept. 10, 2022.

As a Mississippian, Morgan Freeman is a source of great pride to his home state.  Having grown up in the Mississippi Delta, where he discovered a love for acting at the age of nine, Mr. Freeman is a stellar and unparalleled Mississippi Success Story, beloved by many all across the world but especially by those of us Mississippians who proudly know him as “one of us”.

As a Patriot, Morgan Freeman turned down a drama scholarship from Jackson State University while he was in high school, opting instead to enlist in the United States Air Force. He served his country for four years as an Automatic Tracking Radar repairman, rising to the rank of airman first class.

As an Actor, Morgan Freeman’s career now spans into seven decades, beginning in the early 1960s and remaining active even now in the 2020s. From early stints in community theatre, Broadway, and television, Mr. Freeman eventually made it to the Silver Screen and has remained there for over 50 years, starring in more blockbuster films than one can count. He is both an Academy Award Winner and Golden Globe Winner for his role in Driving Miss Daisy, and has been the recipient of numerous other awards, including 5 Academy Award Nominations, 5 Golden Globe Award Nominations, and 3 SAG Nominations, including the Best Supporting Actor Award for Million Dollar Baby.

As a Friend, Morgan Freeman has truly made the world a better place. His concern for the environment, racial equality, and peace have been evident throughout his life and career. And most recently he has been a friend to Natchez as the star of The History Channel’s “Great Escapes,” now wrapping its second season of filming in our beautiful City on the Highest Bluff.

Now, therefore, in my capacity as Mayor of Natchez, and on behalf of our City and Board of Aldermen, it is my pleasure to present to Morgan Freeman this Key to the City.