Watson leads Tigers to victory, look ahead to East Marion 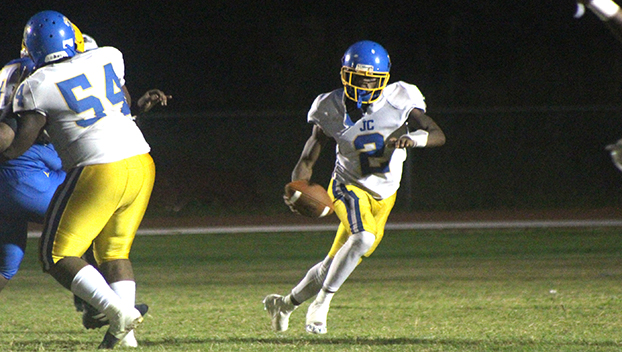 Jefferson County quarterback Jabari Watson takes off on a scramble in a game against Natchez. He is a playmaker and a spark plug for the Tigers. (Hunter Cloud | The Natchez Democrat)

Most teams would have to run the ball in less-than-ideal fields and weather conditions like those that hit much of the Miss-Lou region last Friday afternoon and into the evening. Jefferson County ended up doing just the opposite.

“It was a very tough environment. For one, we had a lot of adversity. Most of the game, we had to go away from our run. We had to go to a more up-tempo style passing game,” Jefferson County head coach Roderick Holmes said. “We had to take advantage of those mismatches and stuff.”

Watson ended up completing 19 of 37 passes for 250 yards and three touchdowns. His main target was sophomore wide receiver Royale Shelvy, who finished with 10 receptions for 130 yards and one touchdown.

Collins led the visiting Tigers’ defense and filled up the stat sheet with an impressive defensive performance. He had 14 tackles, one interception, one forced fumble, and one pass defensed.
“He was everywhere. He had to be,” Holmes said. “The defense is really what is our greatest asset right now. The defense has been on the field more than our offense because our offense hasn’t been clicking like it should be.”

Holmes added that once again his team was not only playing against the opposing team but the referees as well. He said it’s something he doesn’t like to talk about, but it’s something that needs to be brought up.

“It almost seemed like we were playing the team and the refs. It’s just something about officiating this year that’s been really horrible,” Holmes said.

Holmes also pointed out that his Tigers could have defeated the host Crystal Springs Tigers by much more than eight points if they did a few things better.

“One thing we found out about our team is if we take care of the small mistakes, we would easily put that team away,” Holmes said.
Jefferson County (2-1) plays host to East Marion High School of Columbia, Miss., this Friday with kickoff slated for 7:30 p.m. After a pair of losses to in-county rival West Marion High School 19-6 at home on Aug. 26 and cross-town rival Columbia High School 41-6 on the road on Sept. 2, the Eagles picked up their first win of the season at home last Friday night, 41-0 over North Forrest High School out of Hattiesburg.

MHSAA Class 2A East Marion went a combined 6-17 in two seasons under then-head coach Brad Hughes. So a change was needed at the head coaching position.

“East Marion does have a new head coach (Jerry Fletcher). So we may have to go a different direction and make a few changes,” Holmes said. “But we go into each week like it’s a playoff game. And it’s not even district play yet.”