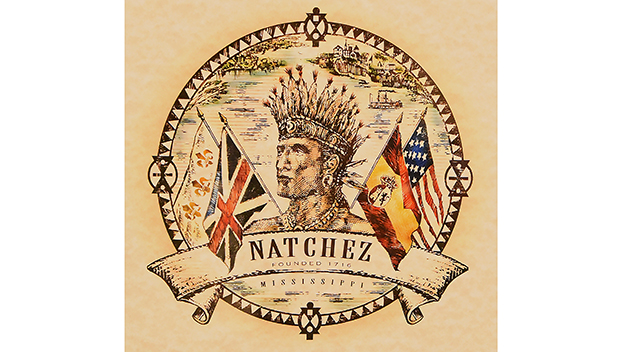 The city seal reflects the many cultures that influenced its formation and growth.

NATCHEZ — The Natchez Board of Aldermen approved the city’s fiscal year 2023 budget at its Tuesday meeting.

Those who pay more in city taxes will not do so because of an increase in the millage rates, officials said.

“The millage rate that has been in place since 2016 remains unchanged,” Natchez Mayor Dan Gibson said.

The budget anticipates increased revenues via ad valorem taxes, thanks to increased values of housing here.

“This budget does include some very significant items, such as salary increases for police officers and others. But I want it understood that does not mean increases automatically go into effect. Until the board has had a chance to specifically discuss, while we approve the budget today, these are budgeted, but they have not been granted until the board takes action on each specific item at a future meeting,” Gibson said.

He said the budget includes funds to purchase specific equipment needed as well as funds to take care of deferred maintenance and renovation of city buildings.

What it does not include is $50,000 sought by the Natchez chapter of the NAACP for its ALICE project. ALICE is an acronym for Asset Limited, Income Constrained, but Employed. That project sought funds from the city to help people who do not have funds to repair their homes but do not fall into the lowest level of poverty.

“We have put a lot of study into the proposal provided to us by the NAACP and we appreciate all of the input and we are very grateful the issue has been raised regarding what we can do to serve those in need,” Gibson said.

“Our SNAP program, since 2013, has successfully awarded grants provided by banks in excess of $1 million and served the needs of 188 needy individuals in our community,” he said. “The proposal from the NAACP is for $50,000 of taxpayer funds for a program called ALICE to assist individuals in the community who make more than the maximum income requirements of SNAP. We believe, philosophically, we need to serve the neediest in our community…To step over them to serve someone at a higher income level and less in need…we are not going to do that.”

In addition, Gibson said the city is seeking to participate in a program that plans to divvy up $3 million in federal funds to municipalities, which would be limited to $600,000 each. The program is run in Mississippi through the Mississippi Home Corp., of which Natchez business owner and realtor Sue Stedman is a board member.

The requirements of that program are the same as the SNAP program, which targets home renovations for the neediest citizens.

After a motion was made to approve the new budget, Ward 4 Alderwoman Felicia Bridgewater Irving moved to amend that motion and include the $50,000 for the NAACP. Ward 2 Alderman Billie Joe Frazier seconded her motion. However, it failed by a vote of four to two.

The board also amended the 2022 budget to account for $780,000 in general fund surplus. That surplus is the result of increased revenues from ad valorem property taxes, as well as decreased expenditures from the city’s department heads.

“We owe thanks to the city’s department heads who have been mindful of their budgets and very careful with their expenditures,” said City Clerk Megan McKenzie.

In other city business Tuesday:

• the board approved a joint order with Adams County needed to improve and repair Morgantown Road.

• the board gave final approval of the sale of bonds for repairs to the convention center, civic center and city auditorium. Consultants helping the city with the bond offering said the city has locked in interest rates of 4.09 percent for Series A bonds and 4.15 percent for Series B bonds, each a fixed rate over the lifespan of the bonds.

• The mayor reported the city has received long-awaited reimbursement of $580,000 from FEMA for clean-up work performed during the ice storm in February 2021. The city still awaits reimbursement from MEMA, the Mississippi Emergency Management Agency.

• The mayor gave an update on the city’s work with Adams County to find a more suitable home for E-911 dispatch. “We are expecting to have a meeting very soon. I will say this, as we continue to look at our budget, which includes renovations to our police department, I don’t see where in our budget we can afford the very large cost that is associated with the county’s proposal. I did explain that yesterday to Board President Wes Middleton and Vice President Gaines. We are all watching our budgets and I hope we can have a resolution soon,” Gibson said.

• Approved extending the contract of Eddie Burkes, who manages the city’s farmers’ market, through September 2023. Burkes receives $18,000 per year.