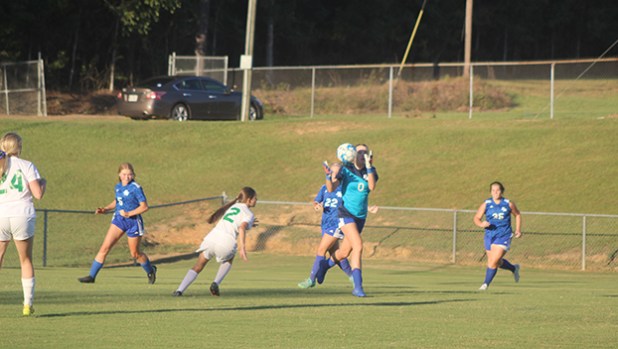 Goalkeeper Ainsley Orr catches a ball inside her box during a match against Cathedral. She kept her 10th clean sheet in a 2-0 district win in soccer Tuesday night. (Hunter Cloud | The Daily Leader) 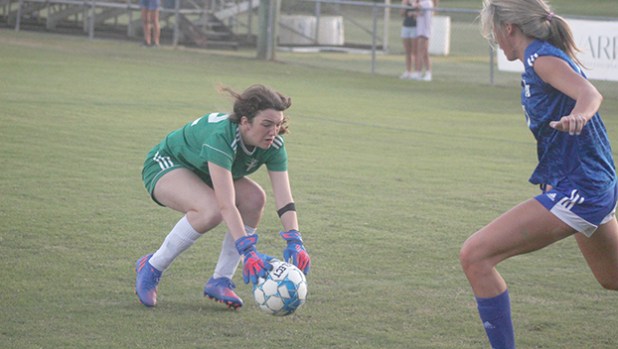 Cathedral goalkeeper Molly Foster dives onto a loose ball after dropping a ball in the box Tuesday evening. She took a boot to the face but was able to keep playing and kept her team in the match. Two last minute goals led to Brookhaven Academy winning the district soccer match 2-0. One was from a penalty kick and the other was a shot which dipped under the cross bar. (Hunter Cloud | The Daily Leader)

BROOKHAVEN — Cathedral (2-1 in district) and Brookhaven Academy (3-1 in district) went toe to toe for 76 minutes until the Cougars broke the deadlock in a soccer match Tuesday night. BA converted a penalty kick and a chip from Mallory Martin to win 2-0 and avoid extra time. Goalkeepers Molly Foster and Ainsley Orr stood out in the match.

Cathedral’s Foster has played goalkeeper since she was in seventh grade. It was her efforts in goal that kept the team in the game in the first half.

Brookhaven Academy applied a high press in the first half to generate a lot of chances for the Cougars. Foster fearlessly came out of goal and dove at Martin’s feet to deny a scoring chance. Martin converted her PK despite Foster going to the side she shot at late in the second half.

“In practice, I got a concussion. I’m scared I will get another one, so I was worried about my head getting hit,” Foster said. “The PK was scary too. It is just so close up, and it is one-on-one. I just guessed the right way.”

A minute or so later, the Cougars added a second goal from Martin to put the game away. Cathedral Head Coach Dennis Hogue said the goal at the two-minute mark caught his players off guard. He could see it in Foster’s eyes as it dipped over her head and under the crossbar.

She faced a lot of pressure in the game and could have conceded a goal earlier in the second half. A ball came in over the top of the defensive line and Reagan Fortenberry challenged her in the air as she jumped up for the ball. Foster mishandled the ball and had to dive on it, taking a boot in the face. It drew some blood but she stayed in the game.

“I knew when I came flying out it would freak her out. When you come running out of goal, it tends to make an attacker spaz out,” Foster said. “It was pretty much instinct once the ball got loose. I flew back to the ball. I was nervous and excited during the game. I know I’m going to get the ball but I’m also nervous I will mess up.”

Cathedral made adjustments at halftime and started to hustle more to win 50/50 balls. It changed the feel of the second half as they gained more possession.

After the game, Hogue said he told the team how they played in the second half was how they should have played the entire game.

As the match neared the final minutes, he felt like they might go to extra time. His guts told him to put Foster up top to give his attack some spark, but he chose to keep her in goal until the second goal was scored. It was too late for her to make a difference, but she was still hustling to make plays.

“She is brave. Molly is the type of player to be nervous and beside herself.  It is like the whistle blows, and she changes. ‘Give me that ball, get out of my way,'” Hogue said. “I like how it switches, and the hulk comes out. Molly will be yelling and directing players. She will be yelling let’s go and point at her watch. It reminds me of her big sister Gracie. She would bark out orders like a field marshal.”

Foster is the last sibling to come through Cathedral soccer. Hogue said the family has had five players come through the school, and all of them have been great players. She is a freshman.

Brookhaven Academy’s Orr is also a freshman. This is her first year playing goalie, and the match was her 10th clean sheet. She said her dad gave her a goal at the start of the season to have 11 clean sheets.

From the back of the field she can see the entire game. Brookhaven Academy had to bounce back from a 4-1 loss to Cathedral a week ago. They had given up counter attack after counter attack.

It changed from the first whistle. BA won the 50/50 balls and controlled the flow of the game. Orr said she saw a lot more intensity and effort from the girls in front of her.

She was challenged on occasions, but made the saves to keep Cathedral out of the goal. The Green Wave’s Maddie Verruchi had a few one-on-one chances, but Orr kept her cool.

“You can’t panic in those scoring situations. You can’t have any fear. You just have to go at them,” Orr said. “It was hard at first to get over the fear. Especially when there are tall girls. I got over it, and the coach reassured me. Tonight was a big roller coaster. I felt like I was going to have a heart attack. My throat is sore from yelling.”

The pressure eased off when BA scored the penalty kick awarded for a handball in the box. She was worried they would go to extra time and possibly a penalty shootout.

Verruchi was a player to watch for Orr. She noticed the last game she would stay on the side she was aiming her goal kicks, ready to pounce on an error. It is how Verruchi scored one of her three goals in Cathedral’s win last week.