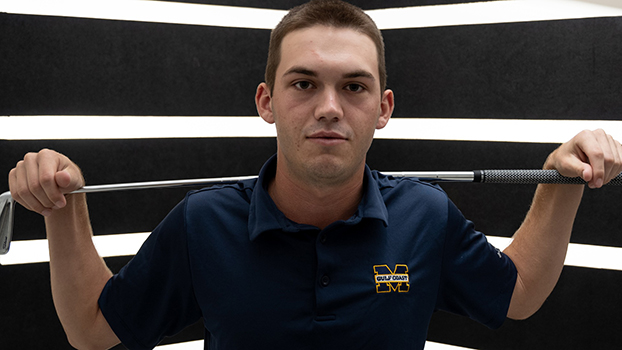 Chase Kaiser celebrated his birthday Monday with a 68, and No. 7 Gulf Coast is within two shots of the lead midway through the first MACCC event of the year.

The Bulldogs are 2-under after 18 at the Northeast Mississippi Fall Invitational, just behind No. 5 Meridian.

“We got off to a really slow start,” Gulf Coast coach Brad Thornton said. “I think that we were able to pick things up in the middle of the round, but I think we left some shots out there. I don’t think we played to our full potential today. But I was very pleased that we gave ourselves a chance tomorrow. We’re in a good position.”

Kaiser (So., Natchez/Cathedral) is in second place at Shiloh Ridge Golf Club in Corinth, one shot behind Meridian’s Lexton Ford, who is 5-under. He’s one of three Bulldogs in the top six.

“He just played exceptionally well from start to finish,” Thornton said. “He hit the ball extremely well, made some putts. He probably could have gone a little bit lower on the back nine, but he had some putts not fall for him. He gave himself a chance and really helped his team out today.”

Will Burnham (Fr., Jackson/Jackson Prep) and Mateo Jimenez (Fr., Diamondhead/Hancock) shot 71 and are tied for fourth. Jimenez is playing as an individual. Andrew Zielinski (Fr., Ocean Springs/Ocean Springs) shot 1-over and is tied for ninth, and Jackson Wise (Fr., Pontotoc/North Pontotoc) is another shot back tied for 12th.

Gulf Coast is 10 shots ahead of third-place Hinds, and Itawamba is another seven shots back.

The tournament concludes Tuesday with the final round.